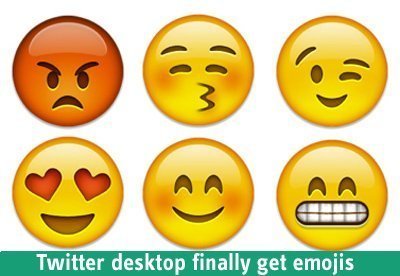 Yay! Twitter has finally added support for emojis on the desktop version of the site.

Now office based peeps and others who prefer the larger view Twitter experience can see and use smileys and the silly fist bump icons and all the other good stuff.

Remember those tweets filled with empty boxes that confused the heck out of you? Well if you’ve got the time and inclination you can go back through your friend’s tweets and read them as those tweets will be upgraded now.

Twitter announced the upgrade by showing off with a bunch of emoji filled tweets.

For those of us who use TweetDeck to manage client Twitter accounts, emojis are still not available which sucks quite frankly!

Also, if you embed an emoji filled tweet the emojis will not show up either. What with the new look profile design and the trialling of a share button instead of a retweet button, I’d say Twitter has been really busy so cut them some slack on the emoji embedding for a bit.