We meet Xena: The Warrior Princess for the first time in Hercules: The Legendary Journeys.

Even if you are not a Hercules fan you should check out the three Season 1 Xena episodes where Xena is the central character. These are not strictly Xena and Hercules Crossover Episodes. Xena’s story arc was meant to end with her death but the character proved to be so popular that she got her own spinoff series.

If you don’t watch those three episodes when you come to watch Xena’s Athens City Academy of the Performing Bards you won’t recognise some of the flashbacks as they come from Hercules episodes. As an introduction to Xena, they will also give you a bit more insight into her dark side and how she came to change.

Also as the Xena series developed many of the characters crossed over from or to the Hercules series. Watching Hercules became integral to the Xena plot development and vice versa.

How many episodes of Hercules did Xena appear in?

Despite several actors crossing over to and from Hercules: The Legendary Journeys, Lucy Lawless as Xena only appeared in seven episodes. This includes the trilogy episodes. 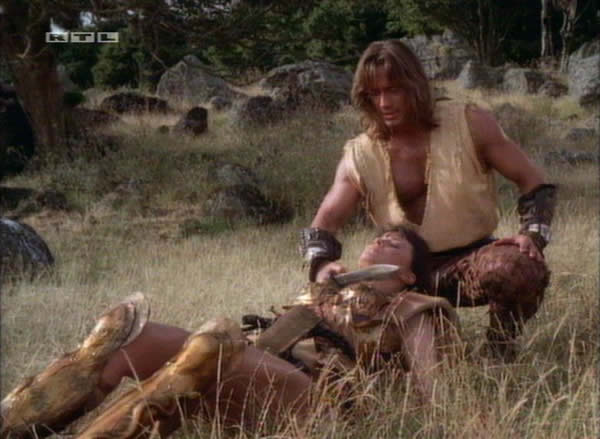 Iolaus meets Xena and agrees to help her fight an evil warlord. He falls in love with her, not realising that she is the evil warlord who is using him so that she can kill Hercules.

This was a very good Hercules episode. We get to see conflict between Hercules and Iolaus when Iolaus’ ego comes into play. You can see why Xena is the head of an army, she has brains and charm. Quite the little schemer. I liked this episode so much I wrote a poem about it.

Xena’s lieutenant, Darphus, turns against her when she saves a baby’s life. Xena joins forces with Hercules to overthrow him.

We find out here that Xena does have some scruples as well as a mighty powerful spirit. I loved it when Salmoneus was trying to create a PR image for Xena. Good stuff. I wrote a poem about this one too.

Xena’s former lieutenant, Darphus, is brought back from the dead by Ares. Xena, Hercules and Iolaus form a plan to get rid of him once and for all. Meanwhile, Xena and Hercules have fallen for each other.

I liked this ep a lot. I liked the character of Darphus, he was so evil it was a pleasure to hate him. More conflict between Herc and Iolaus as Iolaus wonders at Herc’s sanity in trusting Xena. Salmoneus makes such an adoring puppy dog. I love it.

Hercules and Iolaus crossover to Xena when Prometheus is captured and chained by Hera. As mankind starts to lose all the gifts he has given them Xena, Gabrielle, Hercules and Iolaus set out to find the one sword that will free him.

Hera frees Callisto from Tartarus on the condition that she attempts to ensnare and kill Hercules. Posing as a grateful widow rescued by Hercules, she infiltrates a party for his birthday and poisons all the guests including Iolaus, Alcheme and Iphicles. She tells Hercules that the apples from the tree of life are the only way to save them, she and Hercules go in search of them.

Xena and Gabrielle intervene when Ares and Strife frame Hercules for the murder of his new wife Serena.

Stranger in a Strange World

Following a fierce battle with Ares, Hercules races to rescue Iolaus from a parallel universe where familiar characters including Xena and Gabrielle, act very differently. Meanwhile, Zeus appears to be dying.

Hercules frees a group of slaves and then decides to help one of their number who is blind, seek out his long lost sister. As they head for the docks to board a ship to his homeland, they meet Ephiny – Queen Regent of the Amazons and her centaur son, Xenan. Hercules is shocked when his companion tries to attack Ephiny when he hears that she is an Amazon.

Evil Hope frees Callisto and sends her back in time to keep Hercules from being born. This episode starts where Maternal Instincts stopped.

Hercules is trapped in an alternate world with his evil double The Sovereign, while Iolaus tries to prevent Callisto from killing Hercules’ mother.

These episodes spawned the Xena the Conqueror fan fiction. In this timeline, Xena has fulfilled her destiny to become the “Destroyer of all nations”

Hercules and Ephiny join forces with a centaur and a man accused of murder to try to stop a community from being destroyed by an erupting volcano.

This episode is not part of Xena and Gabrielle’s story but if you ever want to follow Ephiny’s story then this Hercules episode may interest you.

Hercules crosses over to battle his father Zeus and protect Xena’s baby whose birth signals the end of the Olympian Gods.