Oh happy, happy days! Game of Thrones is back finally. I’m sure I’ve started walking with a spring in my step, that’s how whipped this show has me. It’s like a long-distance romance where you only get to spend 10 weeks of the year with your lover. Ahem!

Anyhoo. I was waiting for my favourite reviewers Awesomely Luvvie and Tim Surette to post their thoughts on the premiere so I could voice my opinions in the comment section but as HBO only sent preview screeners out to President Obama, reviewers have had to watch the episode live like the rest of us.  This means reviews won’t magically appear as soon as the show has aired like I’m used to. So I’m going to string my thoughts together here.

As usual, I went into the premiere with very little expectations. I didn’t expect Jon Snow to be resurrected in this first episode entitled The Red Woman. I didn’t even expect to see him in the first scene but it was very fitting. I actually felt respected, like the showrunners wanted to give us some semblance of closure. (Take note writers of The Walking Dead – Yes I am still bitching about that). At the same time, the contrary part of me shouted “rub it in why don’t you”, when the cameras panned closer to Jon’s body and his unblinking eyes looked very dead. I’ll accept that dead is dead for now. 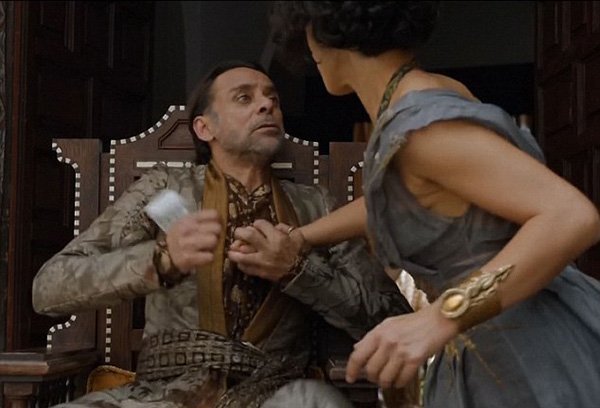 There was so much going on in this episode it was a lot to take in. We basically visited everybody, even the murderous Sand Snakes. I actually thought the scenes of Ellaria Sand and her daughters killing Doran Martell and his son Trystane could have waited for an episode or two. Maybe in a different episode, they could have added more context. Not that much more was needed really. It’s your basic plotline: she’s out for revenge for the death of her lover. Which is totally unnecessary as Oberyn was not murdered or killed in unjust circumstances. He had a fight and he lost.

I’m assuming that Elaria’s coup means she is going to take on the Lannister’s but who cares right now? It’s the first episode, give us time to mourn the dead, the blind and the kidnapped people.

Sticking up for Jon

I’ve always liked Ser Davros and hope that his willingness to stand against Ser Alliser won’t get him killed. He’s seen what Melisandre can do so will he prompt her to bring Jon Snow back from the dead or will he just have her kill off the whole of the Night’s Watch or both?

That’s assuming that The Red Woman hasn’t committed suicide. I know I’m jumping ahead but let’s talk about the final scene for a minute. Melisandre’s prophecies have been about as useful as Olivia Pope’s gut. Stannis Baratheon could testify to that if he wasn’t dead. Seeing Jon Snow dead must have broken her spirit because the woman took off her necklace and revealed her true self to our unsuspecting eyes (unless you’ve read the books). What a sight. How old is she? 200? 250?

The big questions is, does her necklace just hide her true nature of does it also power her batteries? If it’s the latter, then we were witnessing a suicide attempt in that final scene as she crawled into bed all crestfallen and depressed.  If Melisandre dies then there is still hope that the Red Priest Thoros of Myr could bring Jon back. Personally, I don’t think we’ve seen the last of Melisandre. 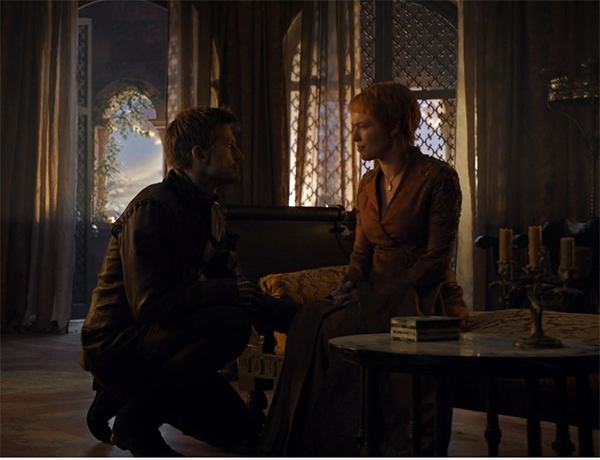 I was ready to get all teary eyed for Cersei over the loss of her daughter. As much as I despie Cersei, Lena Headey is an amazing actress who has on occasion reduced me to tears. Alas, her scene with Jaime was all too brief. We just had long enough for her to tell brother/lover that this was all prophesied. The witch promised her three children and she promised that they would die. Two down one to go. 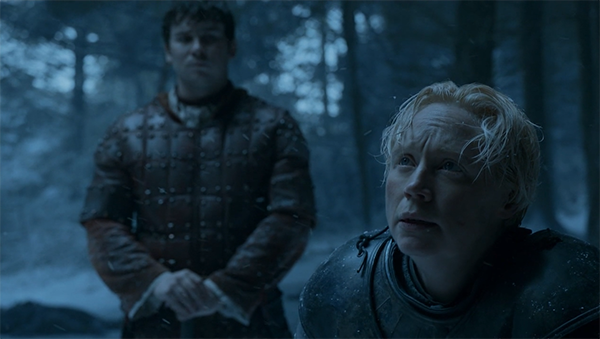 In the season five finale, Reek finally grew a pair and helped Sansa escape from the disgusting creep, Ramsey Bolton. From here on in he is Reek no more. When it came to crossing the cold icy river to escape the hounds, Sansa wanted to give up which pissed me off. I know she’s been through a lot but I thought her time spent with Lord Baelish had stiffened her spine a little. Clearly I was wrong.

Thankfully, Brienne of Tarth arrived in time to save Sansa and Theon from Ramsey’s men. I’m sure Brienne was thinking “If you’d lit the candle when I said, this could have been avoided.” Although when Sansa finally lit the candle Brienne had run off to get revenge against Stannis for the death of Renly Baratheon. Better late than never.

I am Daenerys Stormborn 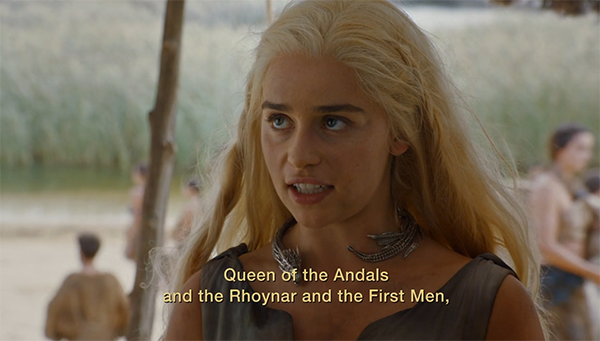 Danny has been captured by Dothraki warriors who take her to their Khal, Moro. He’s looking forward to bedding her and is totally unimpressed when she reels off her long name. It’s not until she mentions being the widow of Khal Drogo that Moro shows some respect. Poor Daenerys Stormborn of the House Targaryen, the First of Her Name, the Unburnt, Queen of Meereen, Queen of the Andals and the Rhoynar and the First Men, Khaleesi of the Great Grass Sea, Breaker of Chains and Mother of Dragons. It is forbidden to lie with a Khal’s widow so  instead of sending Danny back to Meereen, Khal Moro tells her she will spend her days in Vaeys Dothrak, The Temple of the Dosh Khaleen. Basically, she is expected to take up knitting and gossiping with a bunch of other widows of dead khals. 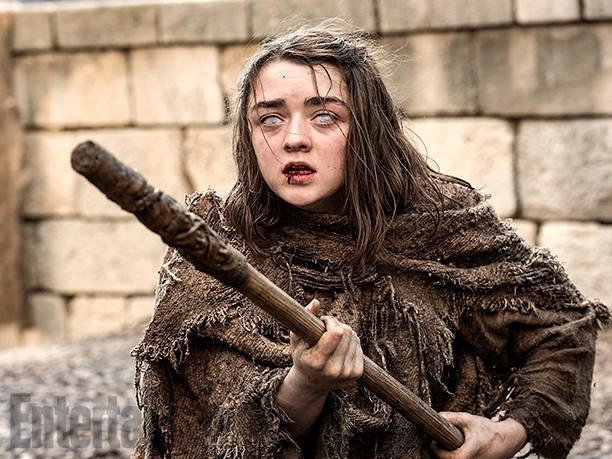 We caught up with Arya with no explanation as to why she is out on the streets begging. Can we assume that she has been kicked out of the House of Black and White for killing Ser Meryn Trant whose life was not hers to take? Or is this another part of her training?

I think the writing has changed from previous seasons. I don’t know if the knowledge that the series is ahead of the books is colouring my judgement but the dialogue between Tyrion and Varys wasn’t as clever as it’s been in the past. The scene in the marketplace where Tyrion tries to give the mother some money was weird. His language wasn’t that way off that the woman couldn’t understand that he was trying to help. The exchange seemed unnecessary and the eunuch jokes are getting old too. The writers have access to George RR Martin who is basically the walking, talking source material. When it comes to Tyrion’s character, they should  keep it classy and not make him the comic relief. He deserves better than that.

Okay. Lot’s more happened but these were my main concerns. I’m going into season six of Game of Thrones with these assumptions/hopes/dreams/whatever: