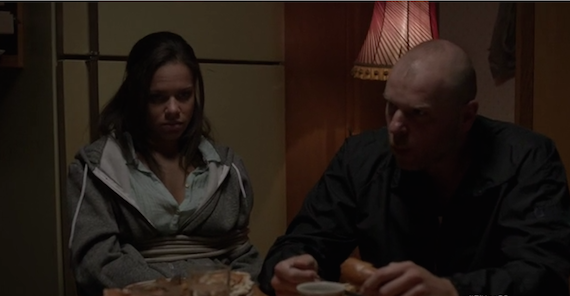 It seems like an eternity since the Season 1 finale of Bitten aired but in reality it’s only been a year. One long arse year to be sure but it’s okay, we are here now with two back-to-back episodes to kick of the new season.

Things have changed this season as the focus shifts from Elena being special to exploring the deeper mythology of the show.

The last time we saw Elena and the pack they were fighting for their lives following the mutt uprising led by Jeremy’s father Malcolm. Rachel was kidnapped from Stonehaven and Logan ran off to search for her. In the season 2 opener the pack are still dealing with the aftermath of the attack.

The episode opens with werewolf Nate Parker locked in a room alone, babbling and spilling the beans on the plan to storm Stonehven. He’s ratting out Malcolm Danvers to whoever is listening. It looks like Nate was either tortured or drugged as he is in pretty bad shape.

Suspiciously the doors open and Nate escapes. As he runs, we see he was being held in an underground lab. Once outside he morphs into a wolf and starts running to what he believes is freedom but is really a force field of some sort that zaps him and kills him. RIP Nate.

The search for Malcolm and Rachel

The pack has split up in their search for Malcolm and Rachel. Elena and Clay are looking for answers using brute force. It seems that Elena is gunning for Clay’s position as pack enforcer as she yanks out the tongue of the mutt who decapitated her fiancé Philip. RIP that guy!

Logan is searching for Rachel alone meanwhile Nick is teamed up with Joey Stillwill and is following Malcolm’s money. Nick is using his pretty looks and cunning tongue (you know what I mean) to get information on Malcolm’s bank accounts in the hope that following the money will lead to his whereabouts. I was reminded that #teamBitten aren’t afraid to do nudity and steamy sex scenes as we watch Nick seducing the unsuspecting Siobhan Devitt and in the next scene Elena and Clay are mashing bones. They give Game of Thrones a run for their money. 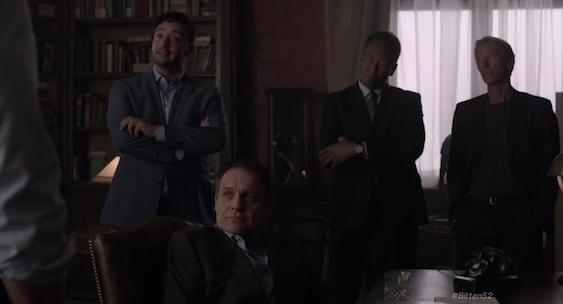 Meanwhile back at Stonehaven, Jeremy is visited by the Alpha Council, an international body of stuffy werewolves who question his leadership because of the mutt uprising. Russian Alpha, Roman Nabokev is the most vocal of the council members. He tells Jeremy he is weak for not having things under control and gives him one week to find Malcolm and bring his head to them. If he fails the council will take over his pack and his North American territory.

When the Council leave one member stays behind. Rodrigo Sanchez offers to help Jeremy take down Malcolm. He says something about Malcolm slipping away with “the pregnant woman” and straight away I didn’t trust him and Jeremy was surprised too that Sanchez knew this about Rachel. He appears cautious but informs Rodrigo that he cut of Malcolm’s finances long ago so he wouldn’t get very far unless he had a financial backer; someone who wants to take over the North American territory. Rodrigo suggests it must be Roman. Jeremy asks if he has permission to take down Roman if he finds he is involved. Rodrigo is happy to consent. Dodgy dude.

Clay and Elena are chasing down a lead by the docks when they are attacked by a group of humans who are also looking for Malcolm. They refer to him as the ‘one true cursed’ but they don’t give the couple a chance to respond to their questions before attacking them. Clay and Elena wipe the floor with them naturally despite the fact that the humans didn’t seem to feel pain.

Doing a body check they find that all the humans have a mark on their neck. It’s the same mark as that poor Nate Parker had. Mmm so looks like these guys were grown in the weird lab.

Nick and Joey find out that Malcolm has a bank account in the name of James Williams and he has money coming in from a Russia account. They give this information to Jeremy who puts two and two together. Despite trying to implicate Roman in the shenanigans Sanchez was not smart enough.

Jeremy confronts Sanchez and accuses him of funding Malcolm and helping him with the pack uprising. He says he’ll let Sanchez live providing he helps them find Malcolm. Loving his life he agrees.

The pack manages to narrow down the search for Malcolm and converge on his position. 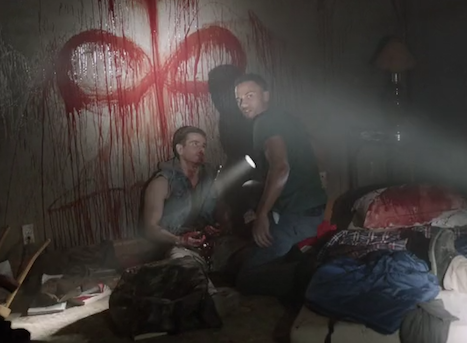 Malcolm is holding Rachel in a house and he has some werewolf goons guarding her. The crap hits the fan for him when a black bird flies into the house and the lights flicker on and off. The bird appears to drop to the ground and die which is a bad sign. Looks like it was a psych out as the bird gets up and flies away and everyone’s nose start to bleed, including Rachel’s. What the hell?

Logan is the first to find the house and finds the bodies of Malcolm’s goons. There is blood everywhere. Clay and Elena meet up with him at the house but there is no trace of Malcolm or Rachel. The symbol that was on the necks of Nate and the humans is painted in blood on a wall; Clay takes a picture of it for further research. 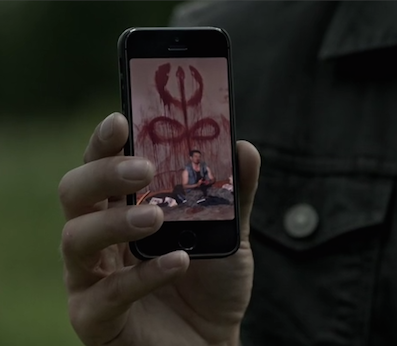 Malcolm managed to escape whatever killed his goons back at the house. He runs but he can’t hide. The pack finally catches up with him but he doesn’t have Rachel.

Jeremy blames Malcolm for the death of Pete, Antonio and Elena’s fiancé Philip. He’s ready to take Malcolm’s head but Rachel’s nowhere to be found so Logan stops Jeremy from killing Malcolm until he spills the beans.

They plan to torture the shit out of Malcolm to get Rachel’s whereabouts. Malcolm tries to warn them that there is something coming and that they need to keep him alive for what’s coming.

The pack weren’t’ the only ones searching for Malcolm. Two women who appear to be witches were also on the hunt. Are they the ones that caused the flickering lights and nose bleeds or was it something else?

We end the episode the way we started, back at the creepy lab only this time it’s Rachel who is getting special treatment, if you can call a big needle in the belly special.

This episode left me excited for the future as the show introduces other supernatural beings aside from the werewolves.