The lowdown on TV series Bones 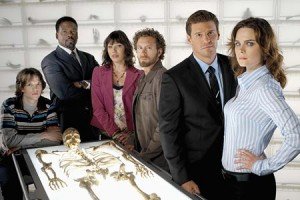 Bones is inspired by real-life forensic anthropologist and novelist Kathy Reichs. Forensic anthropologist Dr. Temperence Brennan, who works at the Jeffersonian Institution and writes novels as a sideline, has an uncanny ability to read clues left behind in a victim’s bones. She is teamed up with FBI Special Agent Seeley Booth to solve the unsolvable.

Currently in its third season this series has the right amount of science, humour and suspense to keep you viewing for an hour.  Despite being a brilliant forensic anthropologist Brennan started the series with a lack of certain social graces which made for some amusing moments. With the prodding of Agent Booth she’s come a long way.

Booth and Brennan work closely with a small team of scientist at the Jeffersonian to solve cases. Booth refers to this team as the squint squad.  The secondary characters are just as well developed as the main characters.

This is definitely worth checking out.