Under the Dome recap: Blue on Blue

We are back under the butter dish that is the dome and the military are planning drastic action.

It’s another day in Chester’s Mills and Joe and Nori are taking an early morning stroll around the dome in Blue on Blue. Joe discovers a huge swarm of monarch butterflies hovering around the dome. What could this mean?

The townsfolk are happy to see the military return and they’ve brought visitors. All the family and friends that were trapped outside the dome have been bussed in for Visitor’s Day. Aaah isn’t that sweet. Barbie is suspicious though, why now?

Sheriff Linda is organising things to make sure people don’t go crazy whilst visiting with their families. She recruits Barbie to make sure no one touches the dome especially whilst carrying electronics gadgets or something. Sound advice girl considering what happened to the first Sheriff. Pity she couldn’t take that advice for herself. As soon as she saw her husband on the other side she was all up on the dome kissing it and touching it. 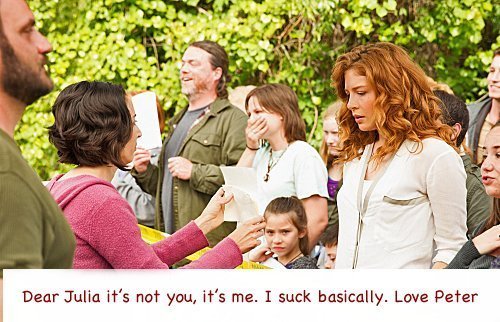 Despite believing that Peter has left her, Julia can’t help looking for him in the crowd. Her sister-in-law is there instead with a “Dear John” letter from Peter. So it seems that if Barbie hadn’t killed him, he was going to leave anyway.

As if we haven’t got enough characters to deal with some random guy shows up claiming to be Nori’s father.  He shows her some family photos as proof and for a bit she’s upset with both her mothers for lying to her. Mum Alice has a go at sperm donor dad, saying he’s only there because the cameras are there and then I tuned out for a bit. There’s enough personal drama going on in this show and not enough about the dome.

Talking of drama, Reverend Drug Addict is hearing voices through his hearing aid. He keeps going on about a city called Moab. Not sure if it’s biblical but he’s real passionate about it. He wants the town repent their sins, starting with Big Jim.

Whilst the townies are meeting with their loved ones, the Rev sees an opportunity to preach to a captive audience. Big Jim wasn’t having any of it though and tried to move the Rev on. Surprise, the voices in his head have given the Rev some balls and he tells Jim he’s not afraid of him anymore.

Rev Drug Addict just fears the wrath of his lord now. He thinks confessing their sins will be cool. Jim says they saved Chester’s Mills but the Rev says they helped some drug dealers make their poison. Ooh so that’s what they were up to before they got butter dished. Jim doesn’t think it was much of a sin because they never allowed the dealers to sell their stuff in the town. You say tomato, I say tomato Jim.

The Rev tells Big Jim no one will follow him anywhere ever, even though he’s fooled some people into thinking he’s some kind of leader. The Rev wants him to confess his sins to the town. Whoops. From that point death was definitely on the cards for the Reverend. Big Jim let him live after he accidently set the fire but no more Mr Nice Jim. 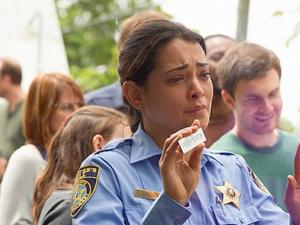 A lot of information was thrown at us during Visitors Day if you blinked you would have missed some things. Like, the Microsoft product placement when Linda was talking with Rusty and trying to figure out how to tell him that his brother Freddy was dead.

Joe’s friend Ben shows up and tells him that China threatened to attack after the dome showed up. Also, Dodi knows sign language and reads lips.

As suddenly as Visitor’s Day is started, it’s over and Barbie is increasingly suspicious. He flashes a coin at a soldier who immediately salutes him like he’s some big cheese.  He uses this to get info and Dodi reads the soldier’s lips. It turns out the military have orders to pull out and don’t plan on returning. The orders came after the butterflies showed up. She said something about insects using magnetic fields to navigate. 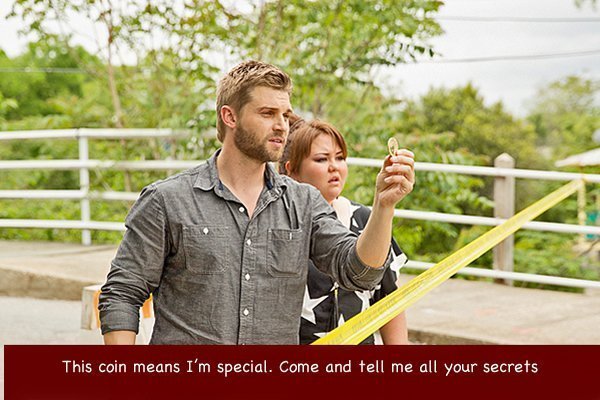 Barbie concludes that the dome is altering the magnetic fields and naturally the government will not stand for that. He figures out that the Rev’s hearing aid was picking up transmissions just like the radio station did and that he must have intercepted a transmission discussing Moab. Turns out it’s not a city but an acronym for the “Mother of all Bombs”.

Visitor’s Day was about saying goodbye to families. The bomb will kill everyone in town if it works. At last some action.

Everyone in town is ordered to take shelter in the cement factory. You know the one that’s dangerous where Junior tried to find an exit under the dome that one time.

In last week’s episode Big Jim discovered Angie chained up and as we figured he would, he left her there. Just like that! He was confused and wasn’t sure what to do so he left poor shivering from the cold, Angie alone. Now we see where his son gets the crazy from. Now that the dome is going to be blown up, he decides to free Angie so she can get blown up with the rest of the town. Thanks Big Jim.

Big Jim confronts Junior about Angie and the kid is not pleased, he goes off looking for Angie. Can you believe Junior is now a deputy? How messed up is that. They gave him a gun and everything. I thought there were entrance exams and stuff you had to go through but what do I know.

Whilst everyone was waiting for the bomb to hit lots of people did stupid things, like talking about their back-story or sneaking out to find people two minutes before the bomb was due to go off. Stuff like that. 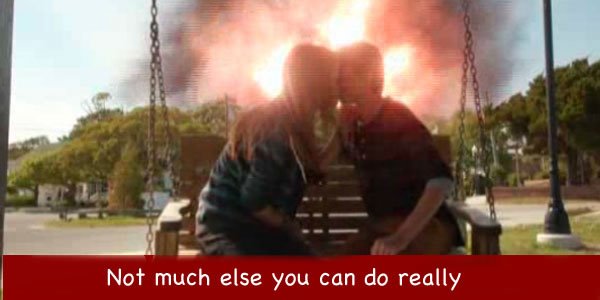 Joe and Nori are out looking for Angie. As the clock counts down to bomb time the kids kiss, the bomb hits they didn’t have seizures, and the dome is still there singing “I’m Still Standing” but the surrounding are is destroyed. 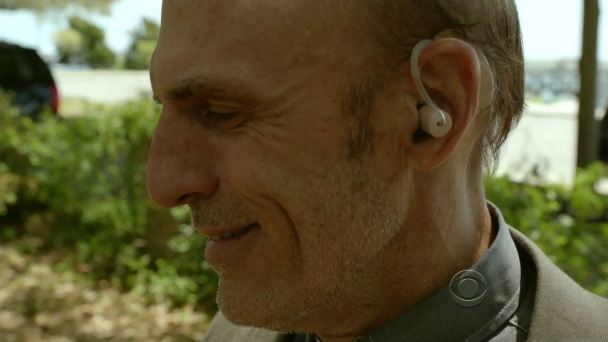 The Reverend believes he saved the town because he repented. Yeah okay dude. It’s time to meet your maker. Jim pushes the Rev up against the dome and naturally his hearing aid pops and kills him. He’s lucky he lasted this long to be honest.

So yeah! All of that happened. 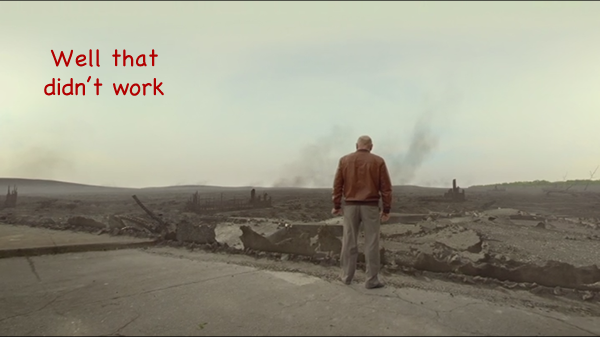 Will I tune in next week to see if there is any fallout from Jim Junior locking Angie in the cellar? Will there even be any ramifications considering she was last seen cuddling up to him?

Will we get any closer to finding out what the dome is?

There are TV shows I absolutely adore and find it hard to be critical about. And then there are shows that I want to like so badly that I tune in every week willing to suspend disbelief and buy into whatever they are selling, within reason. Under the Dome is in the latter category.