Scandal finally returned after a two-month break and I was as excited as the next gladiator. However, this is the first time I’ve watched an episode of Scandal and was ‘OK stuff happened’. Don’t get me wrong I’m not ragging on Ride, Sally, Ride but it didn’t make my heart go bippity-boppity-boo, there was no magic in this episode. But that’s okay; you can’t knock them all out the park right? So let’s talk about Ride, Sally, Ride and why it failed to slay me. If you need an ear-worm to go with this review you can listen to Wilson Picket sing Mustang Sally whilst you’re reading.

♫All you wanna do is ride around Sally ♫ 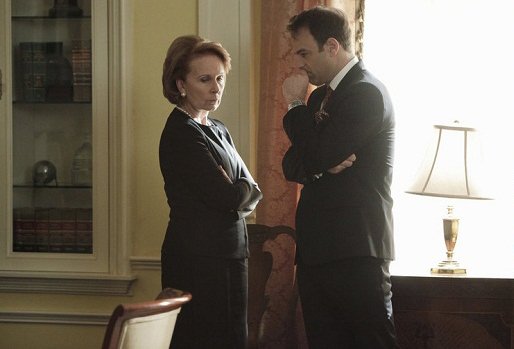 Previously on Scandal, Sally Langston announced that she was running for president then killed her husband Daniel Douglas and called Cyrus to clean it up. Cyrus thought he had Sally in his pocket and now that she was in his ‘club’ she wouldn’t run against Fitz. Wrong! Leo Bergen, Sally’s fixer has convinced her to run. Never mind that she murdered her husband, Sally is using the old ‘devil made me do it’ excuse for killing Daniel Douglas.

So, that was my first disappointment. I don’t know why I thought having Sally in the club would be more exciting than the old bat sticking to her skewed principles and running against Fitz. But I’m sure this storyline will pay off in the end.

Fitz jumps out of his pram

So on hearing the news that Sally is running against him Fitz throws some stuff and hits the bottle again. I don’t know what I’m over most; Fitz’s drinking or his on again off again love antics with Olivia Pope. Olivia is back in the White House and they are blatantly kissing in a room where anyone can walk in. No freaking shame.

Mellie loves being first lady so badly she is happy to have Olivia by Fitz’s side getting up to shenanigans providing Liv has the election in the bag. 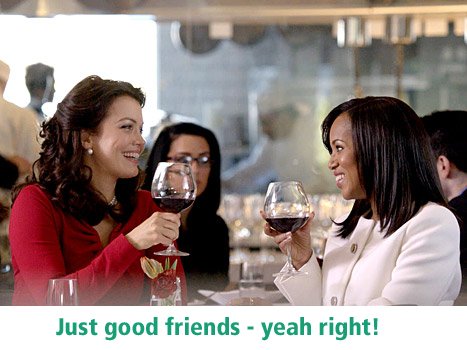 After VP Sally’s fixer put it back out there that Liv and the Prez are sitting in a tree, Melly went as far as to arrange a very public luncheon so her and Liv could show everyone how close they are. She even provided Liv with a list of eligible bachelors and advised her to start dating. That’s what friends do for each other.  Oh Mels, I feel so bad for you.

I also feel bad for Cyrus as he seems to be forever on the outs with Fitz these days. Sally Langston has called his bluff and the fact that he arranged for the clean-up of her husband’s death means if she goes down he’s going with her.

Is it Fritz or Fitz 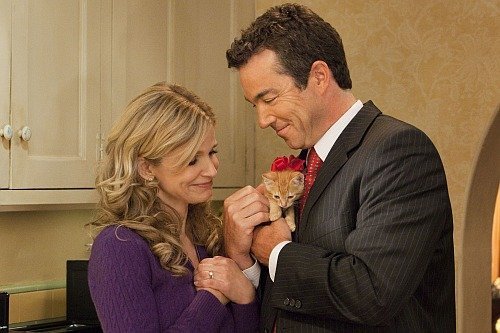 Fitz has decided to choose his own running mate and it turns out to be The Closer’s Deputy Chief Brenda Leigh Johnsons husband, Fritz Howard (Jon Tenney). Whilst Olivia was protesting at Fitz’s choice I was busy making Fitz/Fritz connections and totally forgot what the potential running mates name was. Okay, it’s Governor Andrew Nichols, and it turns out he and Mellie have a history. She’s his one true love and having lost her, the Governor has dedicated his life to his work.

I can’t believe that. He’s so freaking gorgeous he can have any woman he wants. But I admit this story has some potential. I would really like to see Mellie get some and I don’t mean a pity screw from her husband. 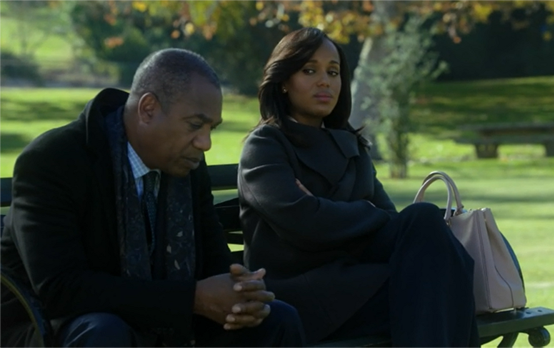 Olivia took some time out from mollycodling Fitz to go and see her dad. She wanted to tell him that she feels for him but he’s still denying knowledge of B6-13. Eventually he goes off into one of his monologues and I have to say it wasn’t his best. Whilst he was threatening to take down all and sundry, I was thinking it was time he got his Miles Dyson on and built Skynet. What better way to take out your enemies, throw in a few androids and you can have world domination. I’m just saying.

We’ve been waiting for ages for Harrison to finally get a story of his own and Adnan Salif looked to be it. I don’t mind having my chain yanked on occasion but I have to say that Adnan Salif being female was a massive let down. The way Harrison has been trying to ensure she doesn’t get back into the country and the way he trembles at the sound of that name made me expect some built like a brick shit-house gansta. Harrison even went as far as to borrow Abbey’s gun, he’s that freaked out about Adnan showing up. I was  surprised and not in a good way when he turned out to be a she. And sooo disappointed when she jumped him and they started to get it on. Where’s the danger?

I want Harrison to get some as much as the next gladiator but unless this Adnan Salif story gets better and more threatening from here on, colour me massively disappointed.

Just when we thought the White House was mole free it turns out James is leaking information to the press about the death of Daniel Douglas. David Rosen isn’t so sure he can trust James again after the whole Citron incident but they have a recording of VP Sally spilling her guts to Cyrus on the phone. James is willing to use his job as Press Secretary to get the dirt from Cyrus.

I was more excited about Mellie being Governor Nichols’s one true love than I am about James and David working to get to the bottom of another White House cover up. This episode was more of a tram ride than the roller coaster that I’m used to. I blame the Adnan Salif reveal for everything.

Oh yeah, Quinn and Charlie are still an item. They kidnapped a kid so they could blackmail a coroner. Something to do with Daniel Douglas’s autopsy files.  Like I said stuff happened, I just didn’t take it all in.

So gladiators what did you think about this episode? Are you disappointed that Adnan Salif is a woman? Are you looking forward to another mole story? Would you like to see Mellie hook up with the Governor? Do you wanna talk about all the big coats and big handbags that are being used to hide Kerry Washington’s baby bump?