Lost “Through the Looking Glass” spurred some random thoughts 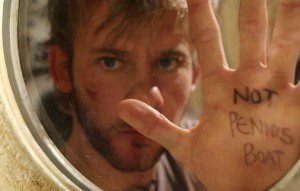 Synopsis: In Lost “Through the Looking Glass”, Ben confronts Jack, claiming that Naomi is not who she seems. Meanwhile, Sawyer and Juliet try to come up with a plan to rescue the hostages at the beach. Inside the Looking Glass, Charlie and Desmond struggle to finish the mission at the underwater station.

Desmond lied about Claire and Aaron being rescued. I think he had a vision of Charlie having a conversation with Penny and the flashing light thing and convinced Charlie to be a hero based on that. Maybe Desmond is tired of saving Charlie, as he pointed out no matter what he does Charlie still dies. It’s not until they reached the underwater hatch that he changed his mind and decided to go in himself.

If the flash forward is real and not one of Desmond’s visions then, I think they got rescued and ended up in an alternate reality; one where they obviously do not belong. That’s why: Kate isn’t wanted for murder and is happy with that (maybe in this one she gets to stay with her policeman husband);  Jack can’t cut it as a surgeon and his father is alive.

Alternatively, if it’s not an alternate reality then Jack’s father is alive because the Island brought him back just like it did with Locke’s father. (I know what the producers said: dead is dead). Jack, Kate and Jack’s father get rescued, maybe a few other Losties but, I think some die on the Island fighting to be rescued. I don’t think Naomi’s people came to rescue anybody, maybe there is some truth in what Ben was saying and there are people even worse than the ‘Others’.

The body in the coffin could be Bernard’s. His wife had cancer. If she got off the Island she’s as good as dead. Bernard took his own life and Jack filled with survivors guilt already, decides to give up. He’s tried to get back to the Island and that’s not working for him so he decides to jump off the bridge. Then again the obit does seem to say the body of J…

They don’t get rescued next season. Jack changes his mind and breaks the sat phone. The flash forwards are what happens when they do eventually get off the island but the next few seasons will show us why they shouldn’t have tried to get off in the first place.

The Island is where realities converge

In Naomi’s reality there were no survivors from the crash. She said as much a few episodes back, what she forgot to add was that all bodies were present and accounted for. At that point she realises that there is definitely something up with the island and it’s even more important that she completes her mission that is to contact the Dharma guys on her boat.