This filk is based on the Hercules The Legendary Journeys episode Gauntlet featuring Lucy Lawless as Xena.

In Gauntlet Xena’s lieutenant, Darphus, turns against her so Xena joins forces with Hercules to overthrow him. 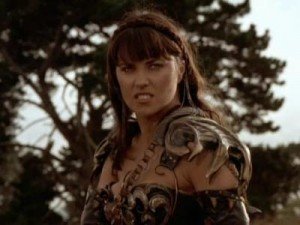 We set the scene to tell the tale of rampage, pillaging and much more.
Please take this as a warning, so you know just what’s in store.
Introducing a hard-faced woman clothed in leather coloured black.
Thanks to Iolous and Hercules the demon Warrior Princess is back.

She’s given this village an opportunity to supply her army with some food.
The message they send back is no. Xena thinks this is quite rude.
She tells the village to surrender or die. They choose the last.
Xena’s army moves in quickly, they really are quite fast.

She sits atop her horse surveying her new army.
Her new lieutenant named Darphus is a swine who’s really smarmy.
Her cry of “Take the village”, is being brutally obeyed.
Villagers are running around screaming in shock and dismay.

Darphus filled with blood lust runs his sword through a village woman.
Xena sees this move, and gives him a look that tells him he’s inhuman.
He gives Xena a smile. She can’t turn back the clock, it’s too late.
Xena can’t do anything to unseal this woman’s fate. 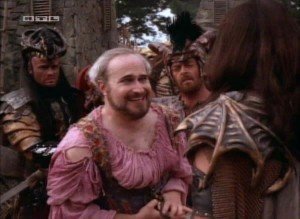 Her soldier Cretus brings to her a pink-frocked lady with a beard.
Xena looks the specimen over carefully. Turns out it’s a man who’s really weird.
Lo and behold Herc fans know him. It’s Salmoneus the get rich quick schemer.
He really is quite harmless. He’s just a profiteering little dreamer. 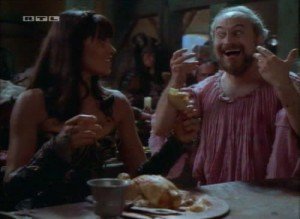 He spins the Princess a yarn that makes her raise an amused eyebrow.
She thinks he’s quite funny, and decides to have him in tow.
Salmoneus forever scheming, the warrior Princess he wants to redesign.
A new polished PR image, so that the Warrior Princess will shine.

Meanwhile, Hercules teams up with a cousin he’s not seen in an age.
Iloran’s village is in danger, from barbarians on the rampage.
They set off together, these barbarians they must stop.
They’d better watch out, they’re rampaging days are for the chop.

Darphus and Xena are planning a raid on the next poor village.
Xena plans to negotiate. Darphus just wants to loot and pillage.
“We’ll do this my way, and give the villagers time to concede.
I want my army to follow me out of loyalty not of greed”.

“I’m going ahead to scout out the lay of the land.
You stay here and sit tight just as I have planned.”
Darphus wonders aloud whose fighting strategies are better.
“Let’s not go there now. Just follow my orders to the letter”.

Xena has gone off scouting not at all worried about her throne.
Darphus decides to take the next village, following orders of his own.
When Xena catches up the village is in cinders and burnt dry.
From amongst the ruins though, she could hear a baby cry. 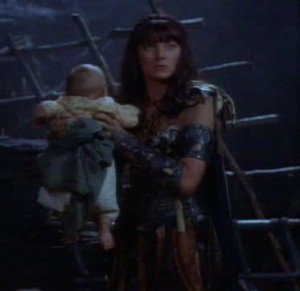 “I thought I’d killed everyone”, Cretus draws his sword.
Xena rushes to the baby with all the speed she can afford.
Filled with anger and rage she holds the baby very near.
“Anyone tries to kill this child will feel my sword. Do you hear?” 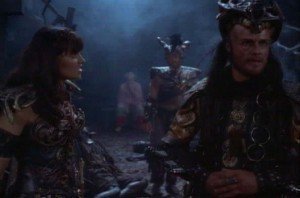 Darphus is unimpressed when Xena reprimands him later on.
“My plan was to show the surrounding villages that we’re mighty and we’re strong.”
“Killing women and children is not my way.” Xena tells him in disgust.
“If you cannot obey me, I’ll replace you with someone I can trust.” 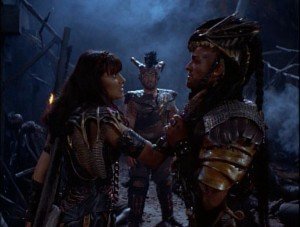 Herc and Iloran come across the first village that was ravaged.
A dying woman describes to them an evil leather clad female savage.
Realising that the barbarians are led by Xena Warrior Hothead,
Herc and Illoran resume their journey, They couldn’t do much for the dead.

Xena goes off alone again, leaving her army to their own device.
Darphus decides to go a looting despite Xena’s previous advice.
He doesn’t give a hoot about what Xena has to say.
He’s going to take the village and he’s doing it his way.

Whilst Xena is baby sitting Salmoneus tells her of his fears.
“I’m scared of Darphus”. “You’re scared of everyone” Xena jeers.
“Don’t you worry, I can hold Darphus in check.
If talking doesn’t do it, then I’ll kill him. What the heck.” 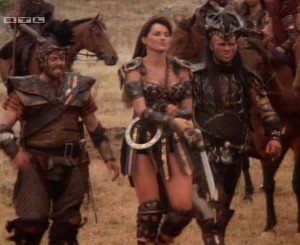 A surprise is waiting for Xena. Darphus has had enough.
He’s taken over her army, and intends to treat her rough.
The only way a warrior leaves an army is for the others to bash them senseless.
“Take off all her armour men. Make sure she’s quite defenceless. 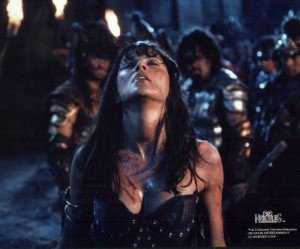 Xena reckons not one soldier will raise a hand to her, so sees the Gauntlet as a joke.
She quickly changes her mind though when the first soldier takes a poke.
Her former soldiers bash and beat her as she walks the line of death.
Salmoneus observes eyes filled with tears. He can hardly take a breath.

To his enquiry a soldier replies “No one has ever survived this kind of treatment.
He watches hopelessly as the Warrior maid is brutally and savagely beaten.
Xena falls to the ground, the soldiers still kicking and bashing.
Darphus watches on, the smarmy git. His eyes all filled with passion.

Finally Xena crawls on her belly to the line that marks the end.
Salmoneus is crying for the loss of his brave new Warrior friend.
But no one knows the spirit of the Mighty Warrior Princess.
She raises from the ground to stand proud and tall. By what god is she blessed. 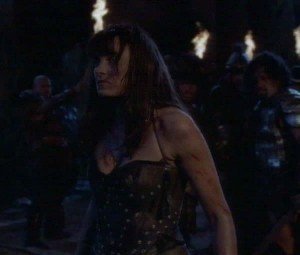 The smarmy Darphus once passionate eyes now are filled with terror.
“Kill her”, he shouts. But, not one soldier will go near her.
“She’s run the Gauntlet and survived. We warriors have a code.
It’s not our fault she’s still alive. We have to let her go”.

With a hack and a cough, Xena spits some phlegm in the face of the smarmy Darphus.
Then through the bushes she disappears to go soothe her near dying carcass.
Sitting in her cave, with the baby near, Xena nurses her bruises and cuts.
The nursemaid is still here, but Sal has gone. He didn’t really have much guts.

Herc and Iloran come across a village all burnt out, women and children all dead.
Herc’s reminded of his family, whilst Iloran stands and shakes his head.
Unbeknownst to them from a distance they were quietly being observed.
By a man whose wife and kid now dead, was intent on seeing that justice be served.

Admittedly he had not even witnessed the village under attack.
It didn’t stop him shooting an arrow that laid Iloran flat on his back.
Herc gave chase and caught this man who was bent on retribution.
“Yes we were at your village but, you’ve jumped to the wrong conclusion.”

“My name is Spiros. I have nothing to live for now my wife and baby are gone.
It is my new ambition to right this terrible wrong.
Well come with us. We know who is behind these vicious and evil doings.
We’ll show her she can’t go around turning villages into a pile of ruins.

Into the cave enters Xena’s scout. He’s not clued in on the new turn of events.
“Hercules is on our trail”, he said in a manner very tense.
The light comes back on in Xena’s eyes, as she sees a way to turn events her way.
“If I bring my army the head of Hercules, I’m sure to win the day”. 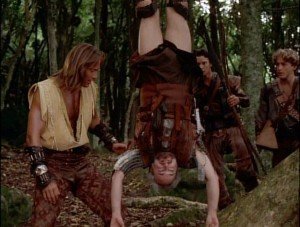 Meanwhile, Herc and his band find Salmoneus stuck up a tree.
Sal’s so pleased to see his friend. He can hardly contain his glee.
The trio tells Sal they are on their way to stop the Warlord named Xena.
They are really surprised when Sal says he has already seen her.

“She’s not as bad as she’s painted, believe me. I tell no fallacy.
It’s her former lieutenant Darphus who has that scorch earth policy.
They cannot believe Sal’s tale of this other side of the Warrior maid.
If Herc didn’t know better, he’d say that poor Sal had just been laid.

But no it seems that Xena has a certain warrior code.
So it’s now Darphus that they’re after. The smarmy little toad.
On their travels out of the blue, Spiros takes a surprising hit.
By Xena no less. “Salmoneus, you love blind little twit”.

“I don’t understand” Sal pleads. Xena what are you all about?”
“I’ve come for the head of Hercules,” they hear the Princess shout.
“Well you’d better come and get it. Or at the least you can try.”
“You’ll be a trophy to win back my army”. Xena let out an eerie cry. 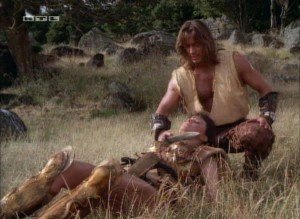 Whilst Herc’s band tend their wounded, Herc and Xena battled.
“I can’t believe she’s doing this”, Salmoneus was really rattled.
It wasn’t long before Xena was beat. Well Herc is the son of a god.
He asked Xena to join them in their fight against Darphus the smarmy sod.

Xena puffed with pride gave them the finger as she went about her way.
“Come back and join us you coward”. Was what Spiros had to say.
“Leave her alone” Herc tells them. She’s a proud warrior now turned sad.
“Don’t call her names and wind her up. It will only make her mad”

Darphus well aware that Herc was on his trail, formed a plan to get him out of the way.
Hercules being smarter foiled the ambush and ruined Darphus’ day.
Being one step ahead of Darphus Hercules knew when next he would attack.
They had to arm the village and prepare them to fight back.

Plans were changed when Herc discovered the villagers weren’t up to fighting.
He hid them all in a cave, where they could comfortably spend the night in.
Meanwhile the band of four set about laying surprises and various traps.
Sal asks if this will hold the army back. Herc shrugs “Who knows. Perhaps.”

Before they can debate further Darphus and his army arrives.
Salmoneus is hoping that they’ll all come out of this alive.
Because of the element of surprise the traps work reducing the army’s total.
Even fighting hand to hand they are losing. Poor Darphus becomes quite vocal.

At one point it seems Hercules has bitten off more than he can control.
Cue the music as the Warrior Princess leaps in. Bless her new-found soul.
Salmoneus is pleased to see his two buddies fighting on the same side.
Xena has an agenda. She wants Darphus’ murdering barbarian hide. 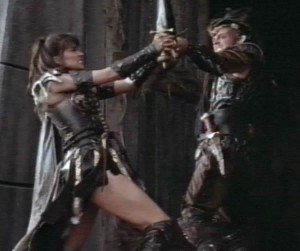 Darphus was under Xena’s control when he carried out his evil plans.
It was part of the Warrior code that he die at Xena’s hand.
With a sword through the heart the lieutenant’s life force was stopped.
Xena removed her sword and watched his evil body drop.

Meanwhile Herc and his band had chased of the mutinous band of raiders.
There was a lot of back patting, as they sung each others praises.
Then Spiros approached Xena about the baby that she had hidden in a cave.
Spiros was more than happy to realise it was his son that Xena saved.

The little band said their goodbyes. Salmoneus and Spiros went off one way.
Iloran and Herc vowed to see each other soon, another day.
The only one remaining was the Warrior Princess.
Hercules enquired “Well Xena, what for you comes next?”

The strong and brave warrior lady was suddenly quite lost and alone.
She’d done a thousand things for which she’d like to atone.
She asked Hercules if she could tag along with him for a little while.
“Of course you can new-found Xena”, Herc gave a knowing smile.