Under the Dome “The Endless Thirst”

In the aftermath of the Mother of all Bombs, the people of Chester’s Mills are disappointed to find that the dome is still standing. I feel weird saying this after all my moaning but this episode wasn’t bad. I had feelings for a couple of characters and I laughed at one point (don’t think I was meant to TBH). Let’s talk about The Endless Thirst.

The crazy stuff doesn’t start until a delivery truck crashes into the town’s only water tower. The prospect of a water shortage triggers mass hysteria and rioting. Six episodes in, the good people of Chester’s Mills finally realise the enormity of their situation. 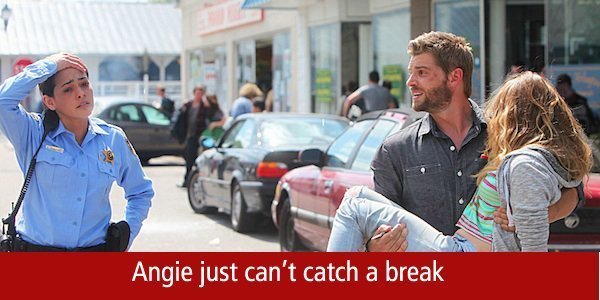 Despite my complaints about their previous chilled attitude to being stuck under the dome, I did laugh briefly at just how quickly the riots got out of hand.

I didn’t find it funny though when poor Rose was robbed and murdered. I hope Big Jim finds those brothers and deals with them severely.

I actually had a spark of admiration and like for Angie in this episode as she fought to protect Rose; sadly Angie has the worst luck and is knocked unconscious. Despite being rescued by Barbie, she eventually finds herself back in the clutches of Big Jim Rennie. Girl just can’t catch a break!

Big Jim told Angie that he always knew something was off with Junior and promises to protect her, even from Junior, providing she doesn’t  mention being locked up in the bunker. If I was her I’d take the deal because what’s the betting that Junior is going to accuse her of having an affair with his daddy.

According to Linda there were sparks between Barbie and Julia. Being one of the worst cops I have ever seen I have to say she’s way off.  Two episodes ago Julia wanted nothing to do with Barbie, then last week she gets a “Dear John” letter from husband Peter now I’m supposed to believe a potential romance is blossoming between these two?

That’s the problem with this show so much talking not enough showing. Linda’s conversation with Barbie is the writer’s way of forcing us to see imaginary sparks. They try to talk the audience into caring instead of showing us why we should. It’s a load of bull crap that was meant to prepare us for the moment when they kissed. Whatever.

Stuff in a nutshell 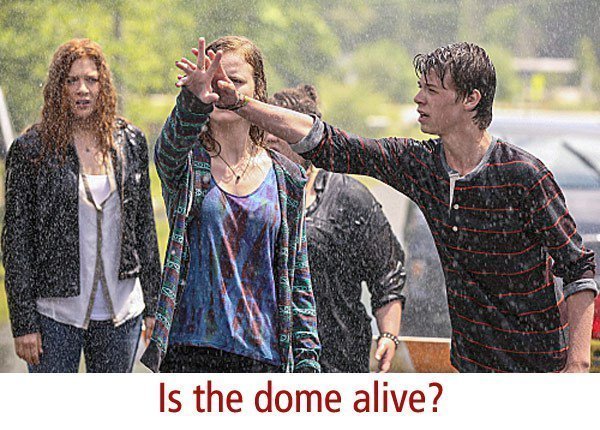 My big question after this episode is whether the dome is sentient or not. So far it seems to be communicating through Joe and Nori. Dodi presumed that the dome must have its own micro-climate which is why it rained. I believe that the dome made it rain when it realised the town’s people were in a major panic. I think it’s sentient and for whatever reason it’s protecting the people of Chester’s Mill.

What are your thoughts?