Twitter CEO Jack Dorsey admitted the social media giant “didn’t fully predict or understand the real-world negative consequences” of its platform, and invited help from users and experts to help correct the course.

“We have witnessed abuse, harassment, troll armies, manipulation through bots and human-coordination, misinformation campaigns, and increasingly divisive echo chambers,” wrote Dorsey in a series of tweets. “We aren’t proud of how people have taken advantage of our service, or our inability to address it fast enough.”

Dorsey ‘s admission comes on the heels of criticism of what is perceived by many as Twitter’s lax response to the misinformation, fake news, hoaxes, conspiracy theories, and Russia-linked bots spreading across its network. Extremist political movements, such as the so-called alt-right, are dependent on Twitter to recruit and propagate. 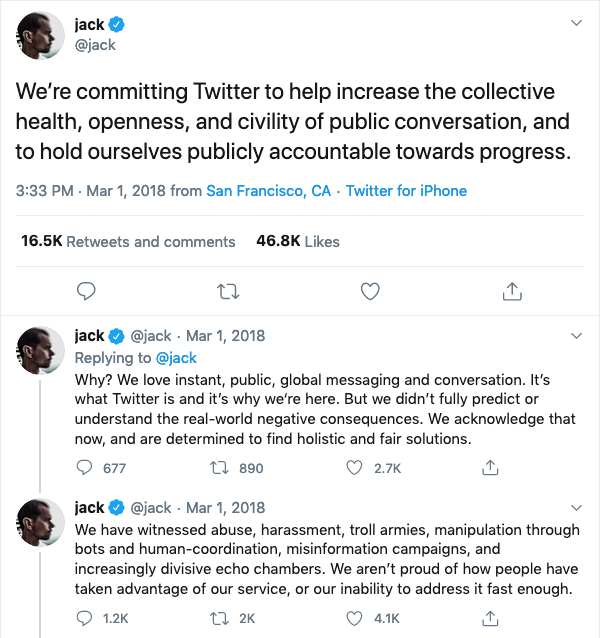 Critics say that Twitter allows this behaviour to carry on in the name of increasing user engagement with the platform, in a play to appease Wall Street investors. In his tweets, Dorsey disputes this characterization.

“While working to fix it, we’ve been accused of apathy, censorship, political bias, and optimizing for our business and share price instead of the concerns of society. This is not who we are, or who we ever want to be,” he wrote.

In order to help fix the problems at hand, Dorsey says, Twitter is attempting to “increase the collective health, openness, and civility of public conversation.” He says that Twitter will move away from focusing its efforts on policing unwanted or illegal content, and towards encouraging the behaviours it considers more positive.

To that end, Dorsey called for submissions for ideas to help identify, measure, and report the “health” of conversation on Twitter, offering “unrestricted” funding for the chosen contributor, as well as collaboration with the Twitter team to make it a reality.

This window to submit ideas will remain open until Friday, 13 April, and Twitter says it plans to announce the first of the selected projects in July.