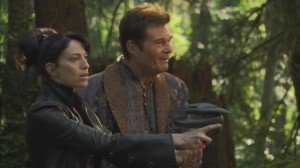 This Stargate episode was about girls and their fathers, Family Ties and making amends.

General Landry attempts to repair the damage to his relationship with his wife. Hopefully this will strengthen the one that he’s developed with his daughter since she joined Stargate Command. It seems that Vala’s father Jacek has a similar idea. He makes a deal to be allowed to live on earth. This is subject to him providing the SGC with information on the whereabouts of Arkad’s naqueda laden ships.

Vala refuses to meet with her father as she is unable to forgive him for not being there for her and her mother. The other members of SG-1 have other ideas and finally convince her to meet with him. Sadly, Vala is right as her father lets her down at every turn. He seems to have learnt his way around Earth’s culture really quickly. He manages to fleece the old ladies in his building out of their money, with weekly bingo nights. He attempts to sell stardust over the internet and has a diet book planned before the SGC put a stop to it.

This was a warm and fuzzy episode as two absent fathers attempt to make up for lost time with their families. Luckily for General Landry he manages to keep the dinner date with his wife and daughter. This goes a long way to showing that he really does want to make amends even though he arrives late. Jacek on the other hand lets Vala down very badly but luckily Vala didn’t expect much from him anyway. 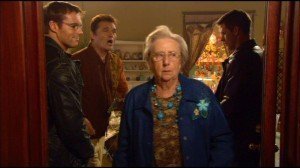 I don’t think this was a filler episode. The show is coming to an end. It might go to movies, it might not. I think had it gone to another season we would have seen this episode sometime in the future. This storyline is tying up loose ends. General Landry gets to make amends to his family and we get an insight into Vala’s background. At any other time it might have been interesting to see. I think people will be disappointed because there aren’t that many episodes left of this final season. But for those who like character development this is a nice episode.

Vala seems closer to Daniel and Mitchell and Te’ealc in most episodes so, it was nice to see Sam and Vala bonding over shopping and a girl’s night in. As I said before a warm and fuzzy episode.