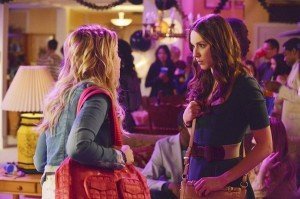 I don’t have many teen dramas on my watch list so if I’m tuning in to a show I expect it to bring it or at least be consistent in its storytelling. Teen Wolf brings it but Pretty Little Liars has to be one of the most frustrating teen dramas to watch.

In episode five, Gamma Zeta Die we had the girls running around a strange campus. The girls are forever on their phones but at the Cicero University campus whilst looking for Hanna instead of texting or calling to see where she was Emily and Spencer went wondering off into dark places.

The music and rustling bushes was meant to be suspenseful but it failed, as it was just plain fraking stupid. I can see why these girls have had their chains yanked for three whole seasons. I feel like my chain is being yanked too and it’s frustrating.

I’ve made a commitment to this silliness and am bound to watch it to the very end even though I just want to take those four stupid Little Liars and slaaaap the stupid out of them. I want to do this to at least one of them every episode.

Left alone to over think things Hanna discovers a gun in her mums closet and has the brilliant idea of heading down to the university campus to bury the gun. I mean whose going to go looking there for it? Do these girls forget that ‘A’ is everywhere and seems to know every silly plan they can come up?

Admittedly I didn’t see the Hanna frames her own mom twist coming, that was well played but still the question is WHY? Why is all this happening?  Who hates these four girls so much they would spare no expense to torment them in this way?

I cannot believe that we are in the fourth season and are no closer to knowing who ‘A’ is. I mean the real ‘A’, not Toby, Mona and all the little minions. I want to know who this mysterious batshit crazy person is who has so much money and time on their hands to torment a bunch of school girls for four years.

When Mona was revealed as an ‘A’ minion it that was just a cop out to keep viewers like me from whinging. Mona was just a minion among minions and this season she is supposedly on ‘A’s’ shit list, just like the other liars and Toby is being led around by the nose by ‘A’.

It’s obvious that Alison has a twin sister and I’ve been thinking that for three seasons now. My suspicions were compounded by the Halloween episode when the ghost child appeared to Hanna’s mum. We got a glimpse of Ali’s twin in the season three finale A dAngerous gAme so to now use stupid Ally masks to try to throw us off the scent is uninteresting. 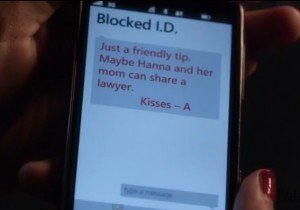 Buffy The Vampire Slayer spoiled me for other teen dramas. The pace and storytelling had me riveted to the spot through most episodes. Even when I hated whole storylines (there were a few in season four, I still managed to come away with a feeling of satisfaction.

Pretty Little Liars is stuck up its own arse trying to be thrilling. Cards are played so close to the chest it’s like the writers don’t want to let the audience in on anything.

Pretty Little Liars is actually worst than Lost in terms of information sharing. It’s running close to being as dumb as its sister show The Lying Game, which I abandoned after Rebecca refused to let on to Emma that she was her mom. Sometimes pseudo suspense it used to replace good storytelling, I don’t have the time for it and yet I’ll tune in next week but I don’t know if I can go through a fifth season with no answers.