This week I’m back to enjoying Pretty Little Liars for what it is: a teen drama where sometimes people don’t behave the way they should and the antagonist cannot be revealed until the end otherwise the show would be over. I’ve spent the last few weeks concerned with who A is and what possible motivation they could have, it’s been driving me nuts so I’m putting a pin in it. Armed with my new attitude this week’s episode was good.

Remember when Caleb and Paige tag teamed to solve the riddle of A? Well Caleb has a new partner now that Toby is no longer a full on A minion. I clearly watch too many cop shows as I was extremely excited when I saw Toby and Caleb (herein known as Taleb) with their version of a crime mapping board trying to work the problem. At last someone is trying to think things through rationally. I fist pumped, YES! (I’m easily excited when characters on TV act sensibly). 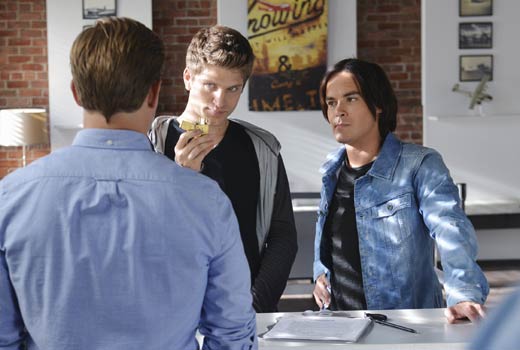 The super sleuths were focused on finding A by finding the plane and it’s flight plan. They came up with much more than that as they also found the pilot. As soon as they questioned the airport guy Nigel. I knew he was a minion. He was way too helpful and offered up the foggy night theory too quickly. How did he know? I am so impressed with Toby for latching on to this and for figuring out that the lighter that probably started the fire belonged to Nigel. I thought they would skip over this piece of info but Toby caught it. 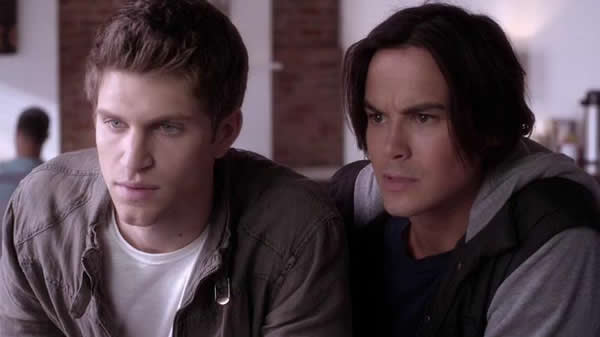 I initially thought it was stupid of him to keep the lighter as A always finds a way to use these things to implicate people but in this one instance it paid off. Toby explained that handing it over to the police wasn’t an option. Now though I think it’s time to get rid of this piece of evidence as A knows Taleb are or the case. After confronting Nigel and taking his phone I think A may well ramp up the fear factor for team Taleb I hope these guys can take the heat.

So this week we are led to believe that Cece Drake is Red Coat and possibly A. Whoever Nigel was making a cup of tea for they trusted him enough to take off the glasses and gloves.

In other parts of Redwood Principle Hackett was ready to pin the smashing of Connor’s car on Mike due to the flimsy link between Aria and Connor but also based on Mike’s past mental illness. Nice to know your Principle has your back. I have a feeling Ezra took a bat to Connor’s car and was willing to go out to defend Mike not just for Aria’s sake but because he knew Mike was innocent. Ezra pointed out that there was no evidence and no fingerprints and the incident didn’t happen on school grounds. Hackett had to reluctantly back down. 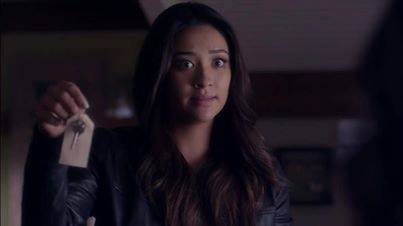 Emily, Emily, Emily. This girl crashes from one mess to another giving A ammunition to take people down. This week it’s Emily’s mum who’s in trouble thanks to her daughter’s lack of sense. Emily stupidly stole the keys to Wilden’s apartment from her mum’s desk. Do these girls never stop to think of consequences? There was no benefit to the trip to Wilden’s place, what would they find that the police wouldn’t have found previously. They really need to learn to talk each other down from the doing stupid things ledge.

What’s annoying about Em taking the keys is that she’s clearly forgotten about the CCTV cameras in the station. Emily’s bad ideas had already helped to finger Ashley for Wilden’s murder. This is why I’m rooting for team Taleb.

So now Emily’s mum has been suspended from work without pay just when the Fields’ had committed to getting special injections for Emily’s shoulder. Her parents are willing to sacrifice so much for her it’s a shame she didn’t just attend the appointment her mum made for her and leave the thinking to Spencer. And of course A has amped up the threat levels. The episode is called Crash and Burn, Girl and I think driving a car through the Fields’ front room definitely sends a message. what a shocker. Did A want Mrs Fields dead? Would depriving Emily of her mum make her stop to think things through a little more?

Talking of mums the most touching scenes in this episode was between Hanna and her mum. Prison orange definitely doesn’t suit Ashley and I hope A will back down soon and get her off the hook. Although depriving all the girls of the safety net of their parents may be an interesting move. Hanna is pressuring her mum to go for self-defence but I’m with Ashley on this one. She’s not guilty and shouldn’t take any deals.

As usual I have no idea of what A’s end game is this season but it looks like she’s targeting the family’s. If Ezra didn’t bash in Connors car then it has to be A, if that’s the case then Spencer’s family could be next.