2015 wasn’t a bad year for new science fiction / fantasy series premières but for me not all of them hit the mark. There were four shows in particular that I was looking forward to watching but they failed to slay me. Here’s my list:

Let’s start with a no brainer. I’m not really a fan of schlock horror so shouldn’t have been surprised at this outcome. I put this on my watch list because I miss seeing Bruce Campbell on my TV screen but after one episode, I realised Ash Vs. Evil Dead is not my kind of show.  It’s a shame because Bruce Campbell is so great in anything he does.

I’ve filed Ash Vs. Evil Dead under the same category as Z Nation which is basically shows I can’t take seriously. I don’t think there is anything you can tell me that can bring me back to the table. I know I didn’t give it the four-episode consideration but sometimes you just know when something isn’t right for you.

I had such high hopes for Minority Report. I was looking forward to the show joining the ranks of shows with a person of colour as a lead character like Sleepy Hollow, Scandal, How to Get Away with Murder and Empire.

It just wasn’t meant to be as Minority Report is just a cop procedural based in the future and when you set aside the three Precogs and their backstory, the rest of the storytelling is formulaic and snoozingly predictable. I agree the Precogs shouldn’t be used as slaves but apart from it being morally objectionable I found it hard to empathise with any of the characters in meaningful way.

Even Dash, who just wants to help people is written as not just socially inept but really childlike and inconsiderate of consequences. This makes his character appear really dumb and not in an endearing way. I hate to say this but Meagan Good seemed uncomfortable in her role which made me uncomfortable too.

Also the future tech in the series isn’t really all that mind blowing which means they could have based the show in the present and it wouldn’t have made much difference.  Fringe set the bar really high for futuristic science fiction storytelling so shows that can’t match it on a bad day (were there bad episodes of Fringe?) don’t stand a chance with me.

Even though Minority Report totally failed the four-episode test, I continued watching in the hopes it would get better. More fool me.

Things were so bad for the show that Fox cut its 13-episode order down to 10. Will there be a second season? Do I care? 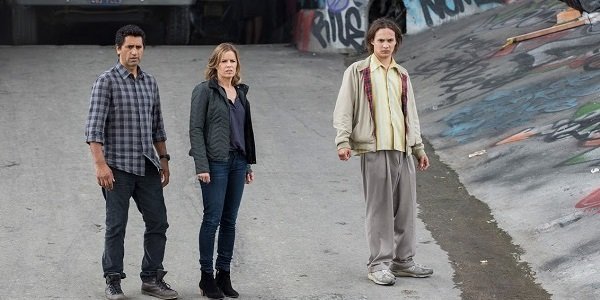 To be honest I’m not surprised I couldn’t get into this series. I thought I wanted to know how people would react to an initial zombie outbreak but after four episodes, I really didn’t care.

As someone whose idea of binge watching heaven is Avatar: The Last Airbender (I watch it at least twice a year), I can’t believe I’m about to say this but hey: I hate the young people in this show! The only character I felt any real compassion for was the mum, Madison Clark. I felt sorry for her for having a drug addicted son and an idiot daughter. Of course I empathised with Travis a little for having a dickhead for a son too. I think I’m over teenage angst in sci-fi since Lizzy lost the plot in The Walking Dead or maybe it’s just teenage angst full stop that I’m over. I don’t know!

If you tell me that these three kids get killed off, I might try to give the show another go.

I tried to forget all that I know about the original series in order to give Heroes Reborn a chance I thought it deserved. Ten episodes in and I’m left wondering what the heck is wrong with me. Why don’t I love this show? Why don’t I give a shit for the two kids whose destiny it is to save the world?

I feel I have become jaded and that maybe I take superpowers for granted so none of the new powers that we got to see at the gathering in Odessa overly impressed me.  I’m hoping that someday I can look back and be impressed by the fact that Hiro was hidden in a computer game until the right moment. But for right now, I find the storytelling is far too slow pace and the time travel thing is unnecessarily mind bending as Noah stepped on butterflies and messed things up.

Will I watch to the end? Yes of course I will. I really want something good to come out of this but I’m not holding my breath.

I am inspired – A poem
Next Post: Game of Thrones book delayed until after season 6 airs