Under The Dome episode 8 review: Thicker Than Water

The interesting thing about watching Under the Dome right now is the appearance of monarch butterflies. They are everywhere in my corner of the UK at the moment and although it’s the time of year for them it’s kinda spooky that they are featured in the series. I was chilling in my garden one sunny afternoon when a monarch butterfly landed on my arm, chilled for a bit and flew off. I waited for loud boom and the site of cats splitting in half but nothing happened. Phew.

So let’s talk about Thicker Than Water. What have the townsfolk of Chester’s Mills been getting up to this week? Well Junior is clearly hard of hearing as he returns to the family home despite being told not to last week. He gets into it with Big Jim and Jim tells him he sounds like his mum. I think that’s a reference to his mental state. Anyway he tells him “your no son of mine” and kicks him out the house again. Jim could win medals for how to lose friends and alienate people. 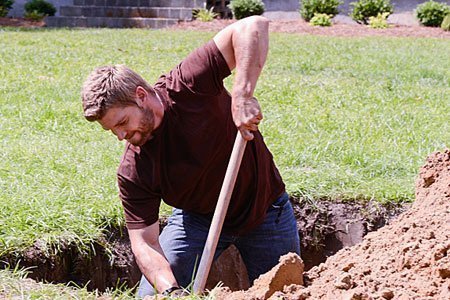 Remember last week when Alice died? Well this week Barbie is in familiar territory digging a grave to bury her. Julia’s standing idly by commenting on how good he is at military corners and how she can’t imagine losing a spouse like that. Lol. Girl, you already did. She goes on about how weird it is, Alice dying and the baby being born and all that circle of life stuff. Lady we made that connection last week.

Meanwhile, Angie wants to open up the diner and tells Big Jim to sort out some food. Her time in the bunker has really made her bossy and skewed her priorities a bit. Jim goes back to Ollie to negotiate a deal for food. Ollie is not in the mood to bargain. He’s willing to starve people out until they get rid of Jim as a councilman. Ollie clearly hasn’t learnt not to mess with Big Jim. Oh well.

Big Jim is on a mission; quoting some old town law he decides to enlist the help of the police to take Ollie’s water by force. Yeah, let’s arm the town and go to war. Junior doesn’t get a gun though as he is on probation. Linda was not impressed with his shooting of Dundee brothers. She justifies keeping him around because she’s shorthanded. Whatever makes you sleep at night, Linda.

On the first of the big showdown’s at Ollie’s ranch, farm (whatever) a redshirt deputy is kneecapped and Ollie chucks everyone off his land. Junior switches sides and takes Jim’s gun off him. Serves Jim right really for being such a douche bag father.

Refusing to be bested Jim rounds up more people to take the well, Barbie has another plan to blow the well and divert the water. Jim’s not on board with this plan as it doesn’t involve killing anyone and besides the water could be contaminated.

In the second showdown DJ Phil is shot, which made me question whether they didn’t have enough redshirts, now their shooting semi regulars. Anyway, Jim’s plan is going tits up but Barbie manages to blow up the well and everyone stops fighting.

Jim and Ollie have their own personal showdown inside Ollie’s house where Ollie expects Junior to kill his own dad. It turns out Big Jim had lied to the lad about how his mother died and Ollie had kindly stirred things up. Jim tells Junior the truth. His mum committed suicide her death was not an accident. Jim sheds a few tears, says he’s sorry and Junior switches sides again and kills Ollie instead. Thank frak for that! I’m so over these two fighting for leadership of a town of crazy people.

Barbie figures Jim wanted the well so he could control the town so having a reservoir again is not a good thing for Jim. He’s an insightful guy is Barbie.
That was the main storyline this week. In other parts of dome town:

Angie has a butterfly tat on her back. And that means what exactly? Is she the monarch that will be crowned? Do I care? Do you?