The Black Panther movie has proven to be very divisive, all this before the film trailers even came out.

The movie has its fans and detractors just like most films. Since it was announced three years ago that Black Panther would have his own movie, people have had a lot of time on their hands to feel either positively or negatively about it.

For the most part there have been a lot of positive vibes surrounding the choice of cast, the powerful female representation both in front of and behind the camera.  And then there are those people who have no intention of seeing the film who are using it to race bait. Many are trolls and some are just fake woke people pushing weird agendas.

Let’s deal with a few of the comments doing the rounds on social media:

This is our/their movie stay away

If you are a Marvel fan regardless of your colour, you know this is the next movie to see before Avengers: Infinity Wars is released. As a fan unless you have a pending hip operation or something that keeps you bed bound for a while, nothing should stop you from seeing this movie. Especially those a*holes and trolls who waste energy telling white people to stay away.

Even worse are the people who are claiming that they went to the cinema to see the movie and were attacked by black people. It is so unbelievably repugnant that people are using images of real women who have been beaten to claim they have been abused.  And for what? To spread contention? For shits and giggles? Some people suck so bad it’s difficult to wrap my head around their motivation. 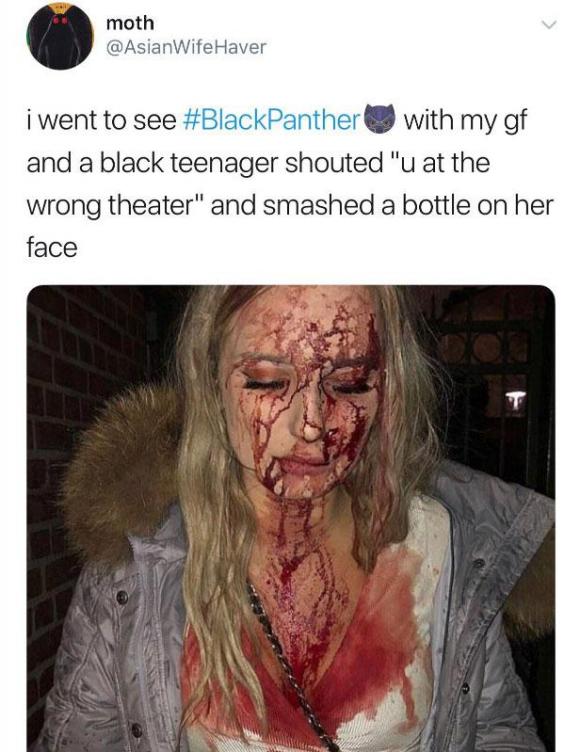 Fake posts are being created to make black people look bad and the sad part of it is some people will believe them #BlackPanther pic.twitter.com/XzNMoxFmWs

In this new age of divide and conquer through social media, trolls hide behind their keyboard thinking of ways to spread fear and dissent. Don’t let them win. Go see the film.

Black Panther didn’t set out to be a divisive movie but people have managed to make it seem like a film that will divide the world forever. Based on what? The fact that it has black in the title? The fact that it has a mainly black cast and was directed by a black man? Fun fact: The world has been divided along class, colour, ethnic and social structures for so long, one little movie isn’t going to make a difference. Unless of course it’s for the better.

Outpourings of the film being racist is more divisive than the film itself. Using the hashtag #BlackPantherSoLit, people have spent so much time and energy hyping up the film that others have to find a way to deflate their joy. Calling the film racist, calling black people who support the film racist and calling people who may give the film a bad review racist; is all nonsense.

We had Blaxploitation films back in the 70s with mainly black casts, were people losing their shit over those films? The people calling this project racist haven’t even seen the film and are mostly basing their statements on the fact that black people are so *ucking happy to be represented in this way.

So there are some on social media reminding us that Disney is not a black owned business and stands to earn a lot of money from Black Panther. Apparently if we really wanted to support black folks we would support local black businesses. 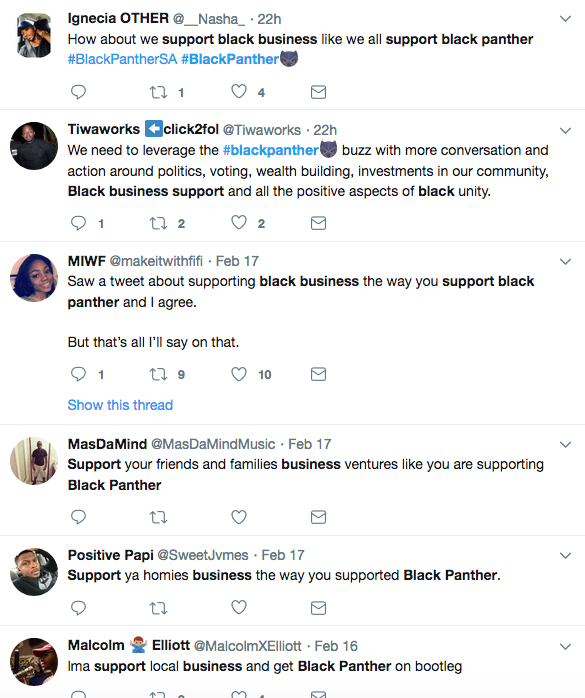 To those people all I have to say is that the conversation not new and is ongoing. It’s also a conversation that can be had in a more reasonable way. Approaching the subject by antagonising the very people whose support you seek, is not the way forward. But, I think deep down these people already know that. #Trolls

Not the first black super hero

Yes, it’s a fact that all the other black superheroes (apart from Luke Cage) did appear on the big screen before, Black Panther but he is still the first black superhero character to be created in the Marvel comics.

Anyway, all contentious discussion aside if you’re a nerd who has been looking forward to this film don’t let anyone spoil your joy. If you are a newcomer who just wants to see what all the fuss is about, enjoy!