The Arrow season 4 trailer was revealed at Dragon Con on Friday, 4 September and can be considered spoilery. It has me super excited as we get previews of the new characters as well as John Diggle’s new costume. I have to say the helmet doesn’t look as crazy as it does in the promo pic and coupled with the visor, it might just work at hiding his identity.

When we last saw Oliver Queen he had quit Team Arrow and left Starling City behind to settle down to domestic bliss with Felicity. I have to say, I hated that ending. It felt like extreme fanfinction but hey, Felicity deserves some happiness. Thankfully they are both back for the new season and Oliver will eventually become the Green Arrow. 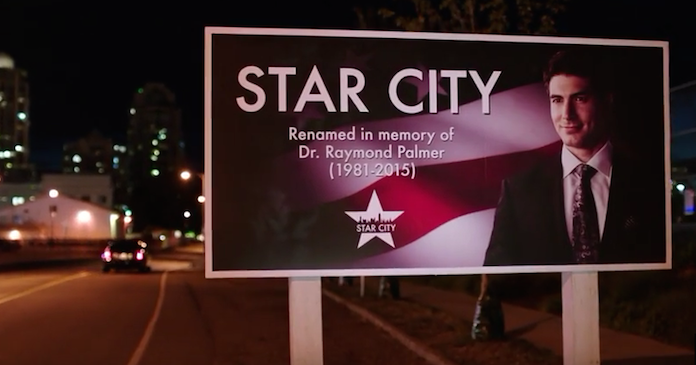 Oliver and Diggle aren’t the only ones going through changes, Starling City is renamed Star City in memory of Ray Palmer (Brandon Routh), who everyone thinks is dead. The city name change was mentioned at Comic-Con.

We finally see Damian Dahrk played by Neal McDonough. His character  was making waves off camera back in season 3. In episode 21, Al Sah-Him, Ra’s al Ghul told Oliver that Darhk was up for the title of Heir to the Demon but he lost out to Ra’s. Dahrk left the League with waters from the Lazarus Pit and a bunch of followers. His agents known as the HIVE are the ones who conscripted Deadshot to kill Diggle’s brother, Andy. Could this be the reason Diggle decided to get a secret identity?

Matt Ryan will be reprising his short-lived NBC role as DCs occult hero Constantine. He will appear in episode 5, Haunted, and will help to resurrect Sara Lance (Caity Lotz).

If you blink you will miss Sara emerging from the Lazarus Pit towards the end. This is a set up scene for her to transition to the White Canary as she heads over to the Arrow and The Flash spinoff Legends of Tomorrow.