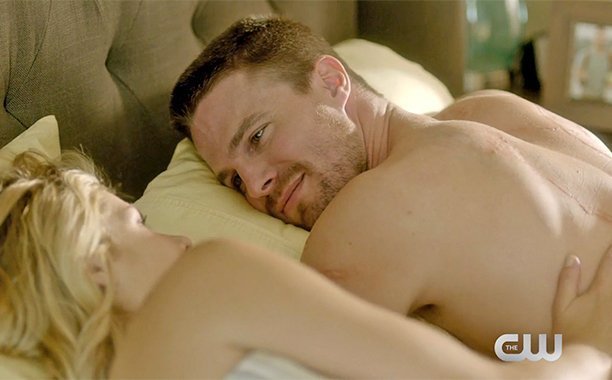 Remember at the end of the Season 3 finale of  Arrow when Oliver Queen (Stephen Amell) and Felicity Smoak (Emily Bett Rickards) rode off into the sunset? Well on Monday the CW released a new promo video for Season 4 on Twitter. The clip gives us a little glimpse into the pair’s life as a happy couple.

A scene from the Season 4 premiere, which will air on Wednesday, shows Oliver and Felicity lying in bed discussing their new life after they have been away from Team Arrow for five months. This probably has Olicity shippers squeeing with delight.

Luckily this bliss can’t last for long as we’ve been promised that Oliver will become the Green Arrow in Season 4 and as much as I want to see Olly happy, I really tune in to see him and Team Arrow kick butt and take down bad guys.

Hopefully we won’t have to wait too long for butt kicking action as we know from the previous promo video that Star city is about to get a new foe in the form of Damian Dahrk (Neal McDonough).

From this new clip we learn that Felicity’s role as CEO of Palmer Tech is being challenged. What is not revealed is that Ray Palmer will be making an appearance this season (how else was he going to transition to the new spin off series Legends of Tomorrow?).

Executive Producer Wendy Mericle teased about how this could affect Olicity. Speaking to TVLine, Mericle talked about the return of Ray Palmer (Brandon Routh) who was thought to be dead at the end of Season 3, promising “a huge emotional reveal, especially for Felicity.”

Fans don’t need to worry about Ray breaking up Olicity as the producer said: “It’s more of an emotional reaction to the loss of a friend than any sort of romantic rival. She’s very happy with Oliver when we come back in Season 4, but [she and Ray] were friends and they left on good terms. It’s more just the relief of, ‘Oh my gosh, I thought you were gone and now you’re not. How exciting is that?’”

Is it Wednesday yet?