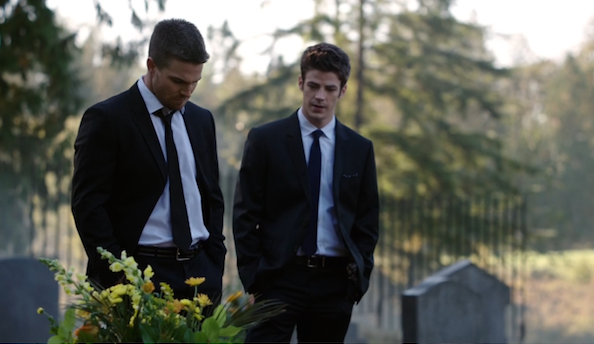 Taking a leaf out of Arrow’s play book I’m starting this review of Green Arrow by jumping to the final scenes of the Arrow Season 4 premier before jumping back. Like what’s up with the gravestone? And are flash forwards going to be a thing? Please don’t let them be a thing, I’m so over the flashbacks, I just can’t with the jumping around.

Okay. Allow me to be a bit more coherent. Not content with introducing a new bad guy to the series, one who looks like he will give Team Arrow a real run for their money, the producers have decided to declare right up front that there will be a death six months from now. And it’s not just any death, it’s a death that The Flash’s Barry Allen zoomed over from Central City to commiserate with Oliver over. Are we supposed to believe that if Barry has shown up, regardless of the fact that he was late for the funeral, that Felicity will die in six months? Or could it be that Thea died and he showed up to give moral support?

After the initial what the heck moment, I decided as the credits rolled that I actually don’t like the blatant foreshadowing. I refuse to spend the rest of the season wondering whose number is up. That scene can’t be unseen but I’m going to pretend it never happened. And here’s why you should too: executive producer Wendy Mericle has admitted that they don’t necessarily know who is dead right now.

“We’re still figuring the plan out for the season, but we wanted to have resonance. If it doesn’t mean something to the characters, it won’t mean anything to the audience either,” she said in a recent interview with a bunch of journalists to discuss events for the season.

So if they are making this up as they go along does that mean we are in for another poorly planned season? Jeez, I hope not. With the introduction of Damien Darhk as the new big bad, this season shows promise so I’d hate for the writers to write themselves into a corner trying to kill off someone Oliver cares about because they’ve already decided it has to happen. Blah!

So yes, let’s forget about it for now and talk about the rest of the episode.

Whilst Oliver and Felicity have been living in domestic bliss in the burbs, Team Arrow have been having a hard time staying ahead of a new threat that they’ve named ‘ghosts’. Thea and Laurel say it’s time to call Oliver in for help but Diggle is still all up in his feelings about Oliver kidnapping his wife and leaving his child in danger back in season 3.

When Laurel and Thea go behind his back and call Olly for help Diggle is pissed and who can blame him really? I’m glad that they didn’t stretch this out too much. Diggle got a chance to tell Oliver exactly how he felt – quite a few times actually – but the ultimate slap down was when he told Oliver: ‘You don’t trust, you don’t love. You were able to fool R’as and join The League because you’re every bit as dark as they are.” Hush!

So once again we have Oliver questioning his dark side and get flashbacks of Amanda Waller stressing the point and basically telling him to embrace it. I’m inclined to agree: use the force Luke Olly, just use it for good. With all the discussions about who he is, Oliver finally rebrands himself as The Green Arrow by taking over the TV channels and telling Star City that he will be a force for hope or some such. 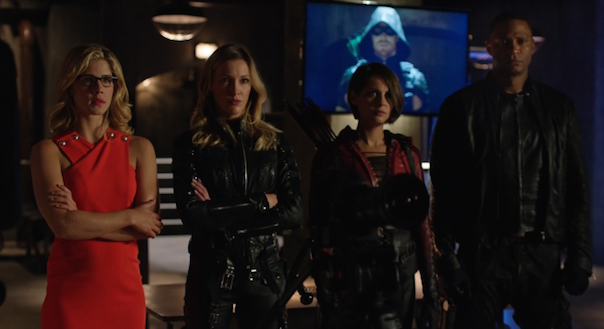 I hated this scene because a: despite Team Arrow standing with him, they actually didn’t appear on camera to share the limelight and b: There’s absolutely no way that anyone that knows Oliver Queen, could look at the TV and not recognise him.

Diggle might be wearing a helmet that looks like a Magneto rip off but at least it hides his identity when the visor is in place. Oliver seriously needs to work on a better disguise or stick to hiding in the shadows where no one can get a good look at him. The moment I saw him on the screen it felt like the scales had been lifted from my eyes and my ability to suspend disbelief up and left. I miss it to be honest – it’s like Superman and those pesky glasses – I think I’m getting too old but I digress.

Then there’s the fact that he’s announced his intention to a guy who practices the darhk arts (yep I went there). If Diggle hadn’t shown up on the train to save Oliver’s butt he’d be dead. I don’t think Oliver can take Darhk on one-on-one right now.

For me, the biggest twist this episode was the fact that Captain Lance is actually working with Darhk. What chance does Team Arrow have with Lance on the other side? Darhk wants to know who The Green Arrow is and he wants him dead. Surely Lance won’t spill the beans regardless of the threat Darhk proposes. This storyline interests me for the minute. I wonder how Lance will wriggle out of this.

Some fans and critics are ragging on Olicity saying the relationship doesn’t work for them but hey it works for me. I wonder if the same people who hate Olicity also hated the dark, broody Arrow from season 3. Felicity brings out a much needed lighter side to Oliver and being in a close and loving relationship might actually prevent him from making stupid decisions as he did last season.

As premieres go, this wasn’t a bad episode. What did you think of Green Arrow?

If you feel the need to totally spoil yourself read what else the producers have planned.