Under the Dome episode 2 review: The Fire

We are back at Chester’s Mills for episode two of Under the Dome. In The Fire, questions from the previous week are answered, no muss no fuss! 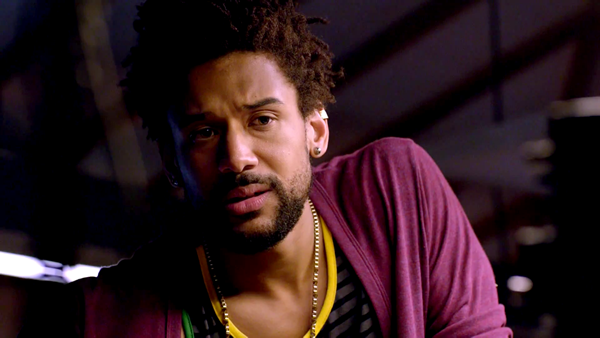 In the première episode there was talk of unusual amounts of propane arriving in Chester’s Mills. We knew there were shenanigans afoot and this week it seems to be drug related. We also find out why Peter Shumway was killed.

DJ Phil and his engineer Dodi, AKA the only radio show in town are still listening in on the military trying to find clues. Journalist Mrs Shumway whose also fishing for clues joins them. She promptly jumps on the airwaves and announces to the town that the military is calling the barrier a dome.

This news increases the panic levels in two towns’ people (yes only two), a farmer who would have used a tractor to break through the barrier if Big Jim Rennie hadn’t stopped him and policeman Paul. To be honest Paul looked like he was over the edge anyway.

It seems Barbie has a conscious; he’s having nightmares about Killing Peter Shumway. Thanks to his dreams we find out that Barbie was collecting money for his boss but Peter couldn’t pay. Peter pulled a gun and in a struggle, Barbie shot him. It was self-defence people. I’ll vouch for that.

Barbie wakes up from his dream and realises he’s lost his dog tags. Obviously they are at the scene of the crime. So let’s go there shall we. Whilst Barbie is searching for his tags he finds Peter’s gun and it wasn’t loaded. Oops. It’s still self-defence right? Anyway, creepy Junior turns up and accuses Barbie of shagging Angie. This is because Angie thought it was a good idea to antagonise her unhinged ex by lying to him about the imaginary affair. This is one storyline I’m pissed off with already.

Unless the dome is really affecting Angie or even Jim Jnr and aliens have taken over their body, I don’t want to hear from either of them. It’s not like I cared about them before the dome happened and the whole jealousy things is boring.

In other parts of town, Big Jim is in a panic when Policewoman Linda confirms the sheriff’s death and lets on that he was trying to say something before he died. Jim goes searching for any evidence that Sherriff Perkins may have had that would incriminate the councilman. We get to meet his sleazy co-conspirator Reverend Collins who is strung out on drugs (to be known as Reverend Drug Addict from here on). He’s been sampling the product. Damn! So strung out he accidentally sets fire to the sheriff’s house that he left to Linda in his will. 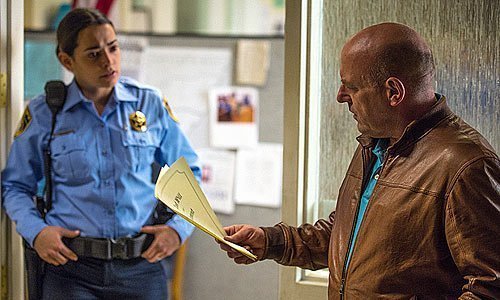 Big Jim is clearly the brains of the operation as the reverend is trapped in the fire.  For a minute I thought Jim was going hoping the reverend would die in the fire. It would be one less person that knows his dirty secret. Linda drags the rev out of her newly gifted burning house and Jim runs off whilst Barbie rounds up the townsfolk to put the fire out. 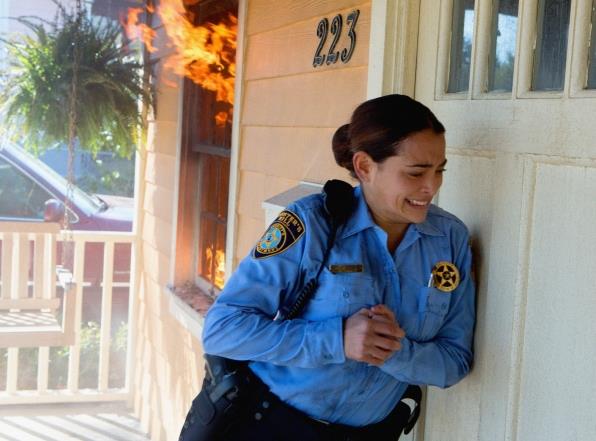 Big Jim comes back with the tractor that the farmer was going to use to bash the dome and levels the burning house, preventing the fire spreading. Yay the day is saved.

Linda is a hero for saving the rev and big Jim is now in charge. Crazy cop Paul tells everyone they are all going to die. He points out that the smoke is from the fire has nowhere to go. He fires bullets at the dome, which ricochet, and one kills Policeman Buddy, Linda’s fiancés brother. It’s only day two and one person has totally lost the plot (Jnr was crazy already) how many more people are going to die before the series finale? We have 11 more episodes before all is revealed. 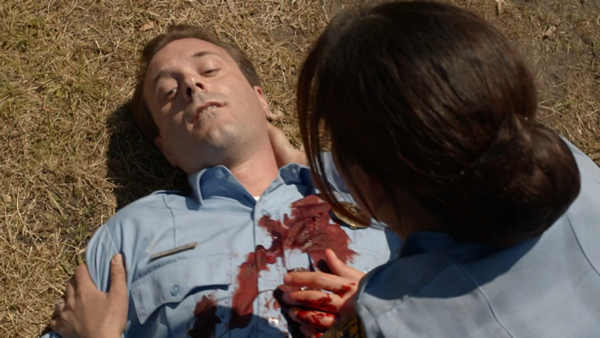 I have to say that after two just two episodes, I like this little show.