Whilst out riding an embattled Xena comes across a young boy who tells her that a warrior named Xena had killed his parents. Already having flashbacks of her past misdeeds Xena decides to change her warrior ways and return home.

Xena is burying her armour and sword when she hears some men harassing some girls from a nearby village and goes to their rescue. Xena discovers that the girls’ village is under attack by a group of warriors under the command of Hector, a vicious lieutenant of the cruel warlord Draco. He has threatened the villagers but Xena stops them.

The villagers are grateful but don’t want Xena sticking around. A young woman named Gabrielle is taken by Xena and the adventure she perceives must follow the warrior woman. She asks Xena to take her with her but Xena refuses to tell Gabrielle that she travels alone.

Gabrielle tries to outsmart Xena by asking questions like, where are you going next? What route will you take? She’s smart but not smart enough to outwit the Warrior Princess.

When Xena leaves Gabrielle’s sister Lila catches her packing. When she tells Lila she is leaving to join Xena to be a warrior,  her sister laughs saying: Gabrielle, I can beat you up.”

Xena just wants to return home but when Draco hears she is nearby he has other plans. We discover that Xena and Draco were once friends. Draco is in love with Xena and wants her to team up with him. He threatens to destroy her village to get his way.

As an introduction episode, this was very good. We get a little insight into Xena’s past. We meet the irritating blonde for the first time. Gabby really was quite a talker.  She really proves herself when she is caught by the giant that Xena once blinded. She talks her way out of it by telling the giant she intends to assassinate Xena. She tells the giant that she has the edge over others because she’s a woman and Xena wouldn’t let a man get close enough to “do her”, at least not that kind of “do her”.

The giant agrees to let Gabrielle go providing she brings back some of Xena’s body parts for him snack on. 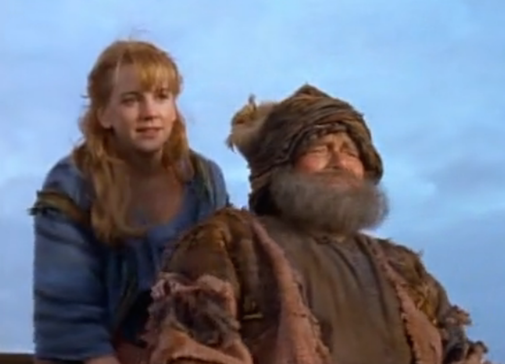 Gabrielle manages to hitch a ride from a passing trader to Xena’s home town of Amphipolis by spinning a yarn.  She says she’ll be good company on the journey as she knows many stories. This is where we see her bard skills in action for the first time.

This is the first time we get to see Xena’s famous pinch as she tracks one of Draco’s warriors and puts the pinch on him telling him “I’ve just blocked off the flow of blood to your brain, you’ll be dead in 20 seconds if I don’t release you.” This proves to be an awesome interrogation technique.

Draco has sent his men to do some major carnage and drop Xena’s name around so that she will be blamed. Xena soon learns that you can never go home and even her mother is unwilling to forget Xena’s sins of the past. The villagers tell Xena that they will never forgiver her or let her take their sons into battle. Draco’s plans work as the villagers believe she has an army nearby burning villages. They intend to put the beat down on Xena but luckily Gabrielle has caught up with the Warrior Princess.

She uses the gift of the Gab to prevent the villagers from attacking Xena. At this point, Xena learns that any attempts to resist Gabrielle is futile. No subtext intended.

Xena and Draco face off and he teases her about her homecoming. She refuses to team him up with him and challenges him to a fight on scaffolding, the first one to touch the ground loses. This fight scene was awesome and Xena naturally kicked Drac’s ass with the help of the villagers who let her walk on their shoulders when the scaffolding runs out.

As a first episode Sins of the Past revealed a lot about Xena and her new besty Gabrielle.

If you are new to Xena and Gabrielle’s escapades check out the lowdown on what you can expect from the series.