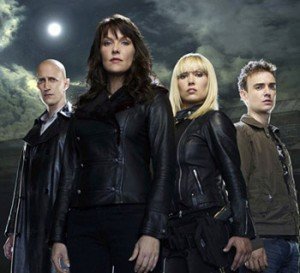 Sanctuary was created by veteran screenwriter and producer Damian Kindler. It is a fantasy web series, which premièred on May 14, 2007. Its stars are Amanda Tapping of Stargate fame, Emilie Ullerup and Robin Dunne of Dawsons Creek.

Amanda Tapping plays Dr Helen Magnus who runs a Sanctuary for all, this mainly consists of strange creatures that we tell ourselves don’t exist. Backed up by her protégé Will Zimmerman (Robin Dunne), her butt kicking daughter Ashley and a Bigfoot manservant played by the fabulous Christopher Heyerdahl, Helen seeks out these strange creatures with the offer of help and sanctuary.

If you haven’t seen the new web-based science fiction series yet, I recommend you give it a look. It is one of the most ground-breaking sci-fi projects of recent years. It is the first broadcast quality, High Definition dramatic series designed specifically for the internet, with 90% of the set created with CGI.

Stargate fans will recognise many of the actors in each webisode. Familiar faces such as David Hewlett, Peter Deluise, Paul McGillion and Kavan Smith combined with the science fiction and fantasy make this a Gate fans dream.

Watch the clip and then head over to Amazon Prime and immerse yourself.