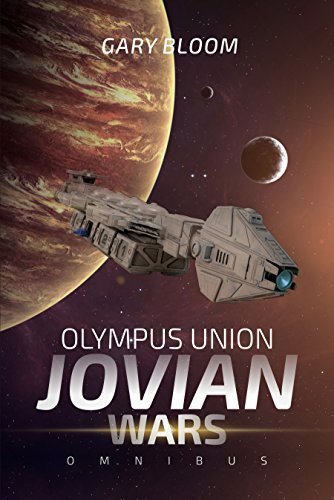 If you are a fan of the Olympus Union universe, you’ll be pleased to know that author Gary Bloom has rebooted the universe in a new book.

Jovian Wars is the epic introduction to the Olympus Union science fiction universe! Forced unification of humankind has reaped rewards, and torn new scars. A quest to look to stars beyond, trips up when the pioneers are spurned. And water… water is still the most important substance in the Solar System. But who will control it, on the edge of known space?

Why an Olympus Union reboot?

Originally three separate books, The Past Repeated, Drawing Battle Lines and The Future Reborn have been re-written, re-edited, and re-packaged as an omnibus. The story still carries most of the same characters, most of the same focus, and many of the same major events. What has changed, however, is the depth and perspective of many of these characters. New twists and wrinkles have been added, and a lot of the previous fluff has been removed.

If you are a science fiction fan who has read the previous version of Olympus Union, this story is for you. It’s a cleaner read, with secrets still hidden. You’ll still follow the evolution of Duncan Lab and Justin Brand, yet see new characters take on interesting directions. And Phelan Rand is still nuts. This is Olympus Union, dear science fiction reader, and this is where you get on!

If you’ve not read the previous series, now’s your chance to jump on board.

The Olympus Union science fiction universe stretches across the solar system. From battles fought on the surface of Earth, to discoveries in domed cities under our oceans, up to the moon and beyond.

You can buy the new book on Amazon.

Where to find Gary Bloom:

LinkedIn – what are the benefits for businesses and entrepreneurs?
Next Post: Mary J Blige set to play time travelling assassin in Netflix’s The Umbrella Academy