How Lucy Lawless would bring back Xena 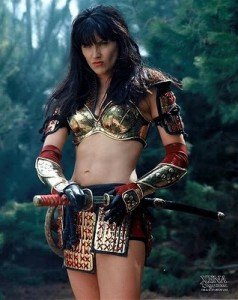 There are rumours of a Xena: Warrior Princess reboot and provided it’s done properly, I’d be all over it. Lucy Lawless who played Xena for six seasons has some ideas about how Xena could be brought back despite the obvious decapitation.

The last time we saw Xena she was having her head separated from her body in the most devastating scene of the whole series. Despite having all the box sets, I’ve only watched season six once.

Lucy said: “The fans were always devastated that we cut Xena’s head off. We thought we were telling a strong storyline and it was hilarious, but it broke their hearts.” No kidding. I was sick for weeks.

Back in May Lucy whetted our appetites for a reboot with theses tweest:

Had an interesting call from a chap who wants to re-invigorate the #Xena brand. You guys may have started something.

I’d love Xena to get her head screwed on right and go off into the sunset with Gabrielle to open a burrito stand at #BurningMan.

“In my dreams it would be that Renee [O’Connor, who played Gabrielle] and I, and Ted [Raimi], who played Joxer, would come back and basically stick Xena’s head back on her and go on a quest,” Lawless said in a recent interview. “At the end you introduce this new Warrior Princess, hand it over and let them run with it. So we could put the family back together, give the fans what they want, reinvigorate the brand and hand it on to a new generation.”

That sounds like fun to me but I can’t imagine who I’d like to see as the new band of Warrior Princess, Bard and their idiot wannabe warrior friend.

What are you thoughts? Can there ever be another Xena, Gabrielle and Joxer for you?