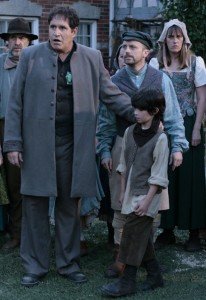 While investigating reports of a “superhero” on another planet, Colonel Sheppard’s team comes across two old acquaintances.

All good adversaries must come to an end.

The highlight of this episode for me was the death of Kolya. He made a good adversary in The Storm and The Eye but after that he got boring. It was good to see him taken out of the picture at last. He lasted a lot longer than Cowen, who finally met his end in Coup D’etat. As adversaries go Cowen was much better but I think he would have got boring too.

The main focus of this plot was Lucius. I wasn’t fond of Irresistible so was surprised that this episode amused me. Thankfully Lucius wasn’t using some plant extract to get people to like him but he was still running a con. By using an Ancient personal shield he managed to convince a village that he was a hero. Luckily the Atlantis team investigate and Lucius eventually loses his edge. I hope this is the last we see of him.

The use of the personal shield both by Lucius and Sheppard raised a few continuity questions. Like, how could Sheppard use the shield once it had imprinted itself to Lucius. And the big one: how could Lucius eat and drink with the shield on? Considering the song and dance Rodney made about it in season one’s Hide and Seek you’d think they would have made an excuse for these errors.