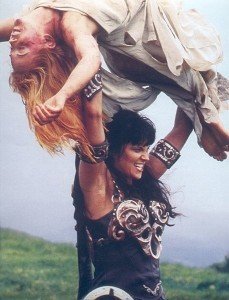 I admit that I found the Xena Rift arc difficult because of the whole forgiveness thing.  It boils down to the fact that I am not naturally a forgiving person. I personally could not forgive Gabrielle if it had been me she betrayed in the “Debt” episodes. I don’t care if it was based on her jealousy born of her love, it was wrong.

The fact that Xena forgave her upset me too. It’s hard to explain because it brings a lot of personal experiences to mind. I was in a position where I was betrayed and in the end (on the surface at least), I forgave the person. I feel weaker for it and kick myself every opportunity I get.

I see Xena forgiving Gabrielle as a weakness.  It was too easy. Although in The Bitter Suite (TBS) we finally see some closure to the “Rift”, I still feel uncomfortable about the relationship.  It is forever changed, just like Xena throwing a stone in a lake, on the surface things appear to be the same but, beneath the surface remains the stone. Some might say the relationship is stronger, I don’t know.

If Gabrielle had not betrayed Xena, would Xena have gone on to physically abuse her as she did in TBS?  Although she blamed Gabrielle for Solon’s death would she have beaten up on the pre- “Debt” Gabrielle.  You know the one who hadn’t given her cause to mistrust her.  Now that they have both practised some form of betrayal against each other, and forgiven each other because of their love for one another, will it now be easier to take liberties?

Season three was painful to watch because it portrayed so much of the real life human emotions and acts that I despise, namely: jealousy, betrayal, rape and  physical violence.  The writers did a mighty fine job. Some scripts were very powerful (let’s not talk about Hope & Dahok), it’s just a pity that a lot of their subject matter was way too close to home for me.

Well I finally wrote my views as jumbled as they are. Here are your views on the rift.