I’ve been quietly checking out Syfy’s latest supernatural TV series, Bitten staring Laura Vandervoort as Elena Michaels, the only female werewolf in existence. The series premiered in January and passed my four episode test with only a few reservations. After watching episode 6 entitled Committed, I have to admit I’m committed or as I like to say: I’ve become quite smitten by Bitten. 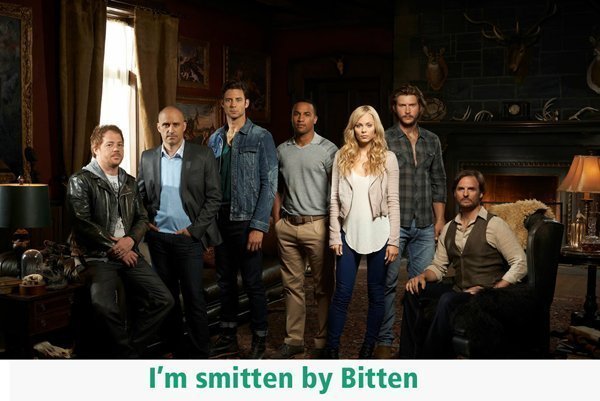 The last time I saw Laura Vandervoort she was wearing a patchwork face and being sucked into the collapsing barn in the Haven season 3 finale. It’s good to see her in her own series.

I liked the premise of the series straight away because it’s about werewolves for a change instead of vampires. I’m a big fan of Teen Wolf so it’s nice to add to my werewolf TV series quota.

The series was slow to start, revealing the mythology of the ruling werewolf pack and the mutts that they rule over in dribs and drabs but overcomes its slow start by episode 4 when the Pack rule is challenged. In episode 5 we find out exactly how Elena became a werewolf. It’s quite upsetting and it took me a few days to overcome my knee jerk reaction to what could have been her murder. You see in Bitten mythology a female werewolf is extremely rare. Human woman who are bitten usually die but Elena survived her bite and her pack family would probably worship her if she’d let them.

The problem with Elena is that she just wants to live a normal life with the man she loves who doesn’t know that she is a werewolf or anything much about her past. Her pack family need her not just because she’s the best tracker that they have but I think also because she’s a calming influence amongst the male dominated pack.

I admit I’m really taken with Elena’s potential. She has the potential to be Buffy, Xena, Sydney Bristow (Alias), Max Guevara (Dark Angel) River Song (Doctor Who) and all the other kick-ass women from TV that I adore rolled into one. She can kick ass in human form and werewolf form and she’s smart. Currently Elena is struggling to retain her normal life but I’d personally like to see her give up on that for the time being and lead her werewolf family in the fight they have been forced into.

Bitten is slated for 13 episodes in this first season and I’m declaring my like for this show in the hopes that the Grim Reaper of TV gives the show a second season.

I’d like to recommend you check this series out if you haven’t’ done so already. When it comes to falling for supernatural shows involving vampires, werewolves and ghouls (I used to have a website called that. I digress), I don’t have the best track record. I cite Blood Ties staring Kyle Schmid as vampire Henry Fitzroy and Moonlight starting Alex O’Loughlin as vampire Mick St. John as evidence of my luck with supernatural creature features. Both shows had short runs but give Bitten a try anyway if you like the supernatural genre. I hope the series has a long run cos I’m basically Bitten smitten.