Colonel Tigh, Tyrol and Anders lead the Resistance on New Caprica to increasingly deadly attacks against the Cylons. Kara Thrace finds herself trapped in a new life with Leoben Conoy, and Duck makes a fateful decision. Meanwhile on Galactica, Adama struggles with the question of whether to return to New Caprica to mount a rescue attempt . 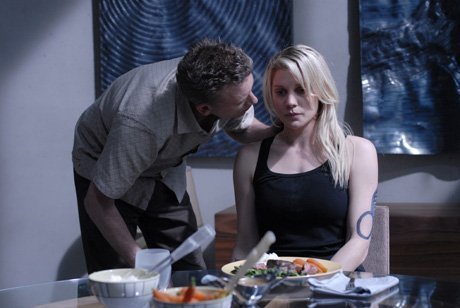 I am so happy to see the return of Galactica especially with such a strong season opener. This episode had me rooting for the god guys as well being conflicted over their methods of sticking it to the Cylons. But the Cylons have yet to do anything that promotes trust. Their occupation of New Caprica is a fine example of just how evil they are. Not all the Resistance members were on board with the suicide bombing and I was hovering between yes and no for a bit which makes me absolutely love this show. How the heck can I be wavering about whether this is a good idea? Shades of grey, I tell ya, shades of grey.

Kara Thrace was never my most favourite character but I have to say she finally won me over in this episode. Taken away from her husband and trapped in a prison dressed up as home she has to endure the attentions of the Cylon Leoben who claims to love her. He exercises great patience with her as she attempts to kill him every opportunity she gets. It shows great strength in her character that she hasn’t been broken mentally knowing that everytime she kills him he will return.

This was definitely an excellent season premiere.