In this episode entitled Exodus, Tigh must decide the fate of his wife Ellen after the assistance she gave to the Cylons. Lee struggles with his assignment to protect the civilian fleet on its journey toward Earth while Adama returns to New Caprica with just the Galactica. The Resistance coordinates an attack on the Cylons just as Galactica arrives. As the Cylons begin to lose control, Number Three (D’Anna Biers) vows to put a final end to the New Caprican experiment.

This was an excellent episode. The Resistance demanded a price for Ellen Tigh’s betrayal and sadly her husband had to deliver the sentence. This episode had my stomach churning all the way through. I prayed that Galactica would pull off the rescue before the end of the episode as I didn’t fancy going through that kind of tension over two episodes. 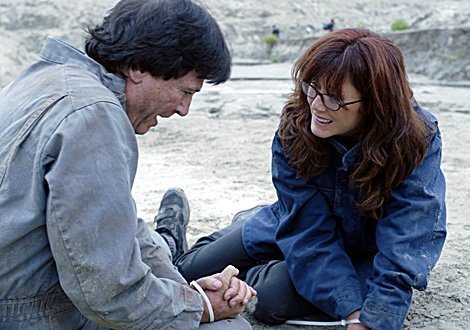 In this episode the bond between Laura Rosalyn and Tom Zarek is confirmed when he hands his gun to Jammer and tells him to take care of Rosalyn. I actually enjoyed their conflicts and hope that this new found respect will not get in the way of that once the dust has settled and they are back on Galactica.

During the fight with Galactica and the Base ship I got the definite impression that scenes were missing. The battle seemed short and bitty. Not up to the shows usual standards (maybe it will be expanded in the DVDs). I was so disappointed with this that it didn’t cross my mind that Apollo might actually come to Galactica’s rescue. And what a rescue, now the Pegasus has gone.

Anders finally finds his wife after not knowing whether she was alive or dead. When Kara is kissing Leoben in order to save Casey I expected Anders to walk in and catch her I was pleasantly surprised when Kara plunges a knife into the Cylon, a fitting end to that frakked up relationship.

The ultimate shocker of the ep was the fact that Casey is not Kara’s child. What a mind frak! Excellent episode.