Does Pedro Pascal have a touch of the Sean Bean’s? WARNING: There are general spoilers for Game of Thrones season 4 and Graceland season 1. If you haven’t’ watched either of these but intend to, turn back now. 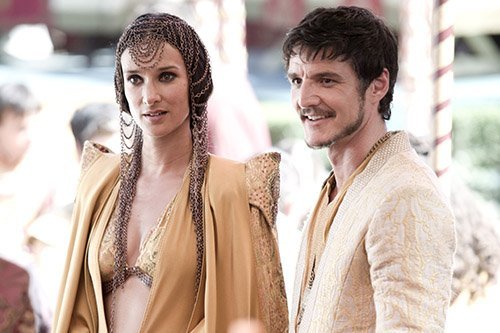 From the moment you appeared in Game of Thrones as Oberyn Martel I was drawn to you. After seeing you as a dull FBI agent in Graceland, the opportunity to have the occasional naughty thought about a character you portrayed was refreshing. Oberyn was passionate and charming, which is an exquisite look on an already handsome man. That moustache and beard combo was divine.

Blessed with an open mind towards sex, confidence and a thirst for vengeance Oberyn Martel fast became one of my favourite characters. How stupid of me! When Oberyn offered to be Tyrion’s champion in season 4s Mockingbird, a tear trickled down my face just like Tyrion, anyone willing to stick up for the only Lannister with a heart will always have a piece of my heart.

On fight night aka The Mountain and the Viper, you were awesome, your coat flowing as you flipped around the screen ducking blows and sticking it to the Mountain. I guess the fight choreographer should get some props but you looked damned good!

But Oberyn seriously screwed up and I didn’t see it coming. Because he was such a confident self-assured character (some may say full of himself), his death was unexpected. In hindsight I should have seen it coming. When you kept shouting, “You raped her, you murder her, you killed her children,” your character spent way too much time trying to get a confession out of the Mountain.

This fight was never about saving Tyrion, it was about getting the Mountain to admit that Tywin Lannister put him up to killing Oberyn’s family. If that were me hovering over the Mountain, I would have rammed my spear in his eye just to keep him down, whilst I waited for him to confess.

I love your vision of Oberyn’s funeral.

Oberyn’s obsession and death just reminded me of another character you played where you were a little too invested in confessions.

I couldn’t get behind your character in Graceland because quite frankly you were a good guy going after Agent Paul Briggs and you did this by planting Agent Mike Warren as a spy in Graceland. Yes, I know it’s normal to root for the good guys but Briggs is just so interestingly shades of grey and Agent Badillo was a bit of a manipulative dick with trust issues.

It seemed like a real nice gesture when Badillo gave Mike a picture of a crime scene taken by Mike’s late grandfather. Mike’s grandfather’s reflection was in the picture making it even more special. Of course he welcomed the gift and took it back to Graceland with him. However, this gift giving came with an ulterior motive: Badillo had planted a listening device in the frame so he could get ears in Graceland. Your character just didn’t trust that Mike wouldn’t fall under the silky charms of Agent Briggs because they lived and worked together.

I totally understand that but there was so much more to Badillo’s obsession with Briggs that he wasn’t letting on to Mike. Like the fact that he blamed Briggs for the death of his best friend and other agents in a house fire. Not quite the rape and murder of a sister and her children but you see where I’m going with this.

Your character was so obsessed with finding dirt on Briggs that he went undercover as the bogeyman Jangles. If there’s one person Briggs is obsessed about meeting it’s Jangles and killing him is on the top of his things to do list. Dressed as jangles Badillo confronted Briggs and tried to get a confession out of him. Do you see the pattern here? Always with the confessions. Seriously dude. Of course the crap hit the fan and Badillo got killed. I have to say it was serves him right.

Baddilo was an interesting character so even though I didn’t root for him, I loved your performance. So far I’ve seen you play obsessive characters that ultimately die because of their obsession.

When I include your brief stint as Eddie in the Buffy episode the Freshman, where you were vamped – more undead than dead – it feels like you have a touch of the Sean Bean’s. I haven’t’ seen the full body of your work, I’m sure there are roles where you don’t’ die. I hear you’ve joined the Mentalist playing another FBI agent, good luck with that. I’m a whole season behind so try not to die whilst I play catch up.

Protect your computer from GameOver Zeus and Cryptolocker
Next Post: Rizzoli and Isles – The death of Detective Barry Frost