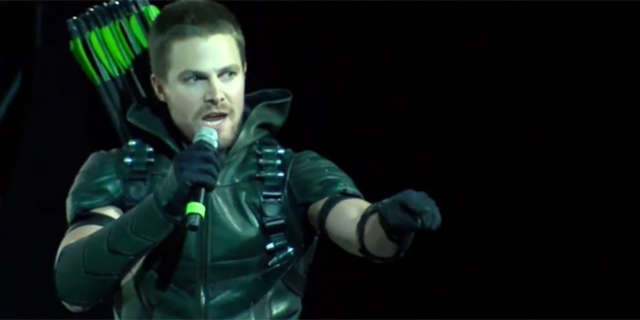 Arrow will get a new outfit when the series returns on 7 October 2015.

Amell came on stage in character as Oliver Queen to kick off the Warner Bros. Television and DC Entertainment special panel in his new costume.

He turned to the audience and said: “After 5 years away I came home with only one goal; I wanted to save my city. Along the way I gained a brother. I saw people that I had know my entire life become superhero’s and I fell in love.”

Big cheers from the audience at that point as we remember the last time we saw Oliver Queen he had hung up the green suit and decided to be with Felicity instead. I felt the final scenes of the season finale read like fan fiction but hey, this post isn’t about that.

Obviously Arrow is coming back to flex his biceps and there are other changes apart from his outfit.

Still in character Oliver says:   “But I lost people forever. The person that I was and the persona that I created failed. But Star City, not Starling City, Star City, still needs saving. And all of you, you can bet your last dollar that me and my team will bust our arses trying to save it or breath our last breath trying.”

Woah! He continues: “All of you have come with us this far, and I would ask you to come just a little bit further with the Green Arrow.”

Boom! Drops the mic! Okay he didn’t drop the mic but still what a great way to introduce Oliver’s evolution from Arrow to the Green Arrow.

Later Amell took to Facebook to show the image of his new costume that will make him become the Green Arrow.

If you missed it you can watch the full panel below: