Making lemonade from a morning full of lemons 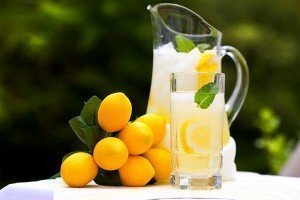 I was wondering what to post for day five of the #31WriteNow blog challenge. Should I moan about my disappointment at the new Doctor Who? Should I polish up one of my draft posts for Twisted? I have options but today happened and I didn’t need those options.

It all started after I finalised the Staff Newsletter and emailed it out. The newsletter contains links to our intranet where staff can read full articles. Within minutes of sending out the email the connection to the intranet was broken. I was on my way to lunch but paused to report the problem.

I was a bit annoyed because we had the same problem last week and the thing was down for two whole days. There’s nothing worse than being bombarded for information from people when they’ve lost their only source but I understood their plight.

Anyway, I finally got out to lunch and decided to have some chicken soup from the West Indian takeaway. Got back to my desk, took a sip of the soup and started coughing. Jeez. They burst the pepper in it again. Just so you know… I don’t get on well with pepper. It’s a myth that all black people love spicy food. Normally when the shop burst the pepper they warn me so I can make another choice but maybe they didn’t realise. I dunno.

After my coughing fit I had the hiccups and was well annoyed by this time and starving. I decided to pop to the bakery and get a pasta salad. What could possibly go wrong?

So I’m paying for my salad and Apple Danish because, why not, I deserve a treat. Whilst I’m waiting for my change, I felt this shadow over me. When I turn around there’s a man standing right up next to me like we are one, waiting to be served. This time the head of the queue is four feet from the counter, way back there. So what he was doing up under me with his stinking hot breath, I don’t know.

It’s not like I was banking or anything but seriously, this man had no respect for my personal space. I was going to chew him out but realised I had too much steam brewing and would probably still be there now.

Why do some people do that? I like to leave at least a two foot gap when I’m queuing (yes, i’m the person who makes the queue look longer than it is), but there’s always that one person who just jams up right underneath you. It’s even worse when they have personal hygiene issues. Yuk.

So yeah, I wasn’t particularly desperate for something to write about but the universe decided to help out anyway. Thanks so much. (I’m being sarcastic). You know the old saying when life hands you lemons, make a blog post about it.

And the pasta salad was totally unsatisfying by the way.