Guest review of Xena Adventures in the Sin Trade 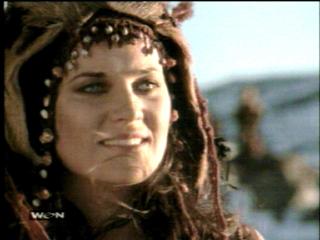 Okay, before I start I’d like to say that AITST parts 1 & 2 had some great moments (Xena fighting the folk at the start of ep 1, her fighting the Amazon Queen) However I’m concerned about where the show is heading….

When Xena started she was a woman who knew how to fight. She was human – like us – with all the attendant foibles. Then came the episode when she beat Ares…… The God of War beaten in a fight?!?!?! Excueeeeeze me! Then comes all the hints that she might be Ares’ daughter. That negates what I felt was Xena’s human qualities – that one person could make a difference. Then along comes this *hint* and suddenly she’s no different from Herc i.e. a privileged child showing off their god-given powers. I know this hasn’t been overtly stated but I hope it isn’t true… 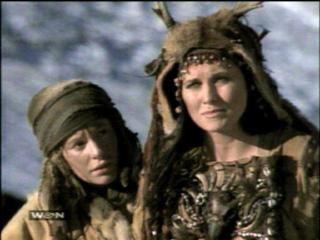 Is she a magician?

The mystical angle is something that I hated in the Lao Moa episodes. All the wavy arm, flying around rubbish that punctuated what could have been – and was up till then – high drama. The absolute worst bit, and I consider it a writers cop-out, was the ending to that two parter when Xena used the powers of her mind to escape. Did she do that in previous eps…errr…no. Why introduce that element when Xena has got out of worse just using her physical skills? Now she’s a Uri Gellar or a Paul Daniels?!?!

Someone posted about how AITST could have lost a lot of unnecessary material and I completely agree. When you think of the basic plot it could all be condensed into one episode rather than two. Now I’m not one that demands fast action in everything I watch, but I do like to see some relevance! This struck me as a script where the director went ” How on earth can I film this over two episodes?!?! ” So a lot of so-called mood elements were employed – i.e. we aint got the script so lets film some dancing and wavy arm stuff, we can add some ‘atmospheric’ music and maybe we’ll get away with it. Well it was one of the few Xena’s when I actually cringed and hit the ‘mute’ button whilst shouting “Get on with the blinking story!” 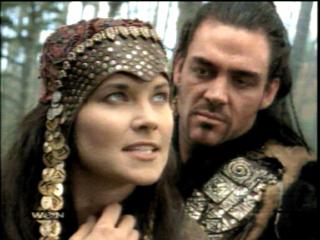 I reiterate that I *love* Xena. How I could count the ways! <g>. But I don’t like the mysticism and I don’t like the fact that people can die yet come back. ( Gabby take note! <eg>) I know that TV series have to evolve but I was hoping that Xena would remain a warrior…..alas she’s become a magician.

Well do you agree? Let me know.