Meg bonding with the King
ShareTweetPinterestBufferWhatsappReddit 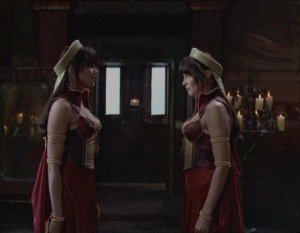 The Warrior Princess tries to protect her look-alike friend, Princess Diana, from the evil machinations of yet another Xena look-alike, a tramp named Meg.

Princess Diana’s father is ill and has sent for Xena to help with the changeover from him as King to Diana as Queen. Diana and her husband have had a baby since Xena last saw them.

Gabrielle walks into a tavern where she is meant to meet Xena and finds Joxer telling tales about Xena. He claims to have made love to her. In this episode Joxer is clearly here for the comic relief again. He makes crude remarks about Xena and Gabrielle is forced to pull on his nose and reprimand him. Slapstick is what Joxer does best.

A creep named Agis has another Xena lookalike under is wing. Her name is Meg, she’s a bit of a tramp but Agis intends to use her to replace Princess Diana. He dresses Meg as Xena and takes her to the palace where she just about passes as the Warrior Princess.

After meeting Meg you soon realise that this is the tramp Joxer has made love to. Meg and Joxer are the perfect comedic couple in this episode. The fact that Meg actually has a thing for Joxer is a joke in itself, it’s as close as he’s going to get to the real thing.

Xena arrives eventually and thwarts Agis’ dastardly plan. The King is not dying after all and despite being tricked by Meg, he forgives her and gives her a job as a cook.

Warrior…Princess…Tramp was a fun episode. Lucy Lawless once again proves she has talent when she plays three parts, and all differently.

Disclaimer: Neither Xena nor her remarkably coincidental identical twin, Diana, were harmed during the production of this motion picture. Meg, however, suffered minor injuries while preparing Aardvark nuggets for King Lias.