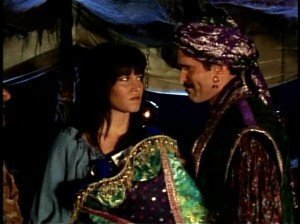 Xena is asked to steal back a pilfered chest containing the world’s most powerful weapon, so she enlists the help of Autolycus, the King of Thieves.

In this episode entitled The Royal Couple of Thieves we get  a change of costume for Xena and our first meeting with Autolycus, the King of Thieves played by Bruce Campbell.

Xena has to set a trap to capture Autolycus in order to ask for his help. She manages to appeal to his vanity and his claim to the title of King of Thieves to enlist his help.

Autolycus and Xena made quite a team (sorry Gabs) even though he did try to push his luck with his hands.

Disclaimers:” No Ancient and Inflexible rules governing moral behaviour were harmed during the production of this motion picture.”