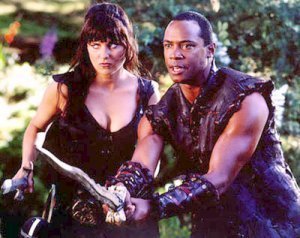 In this episode entitled Mortal Beloved, a visit from the ghost of her beloved Marcus prompts Xena to travel to the Underworld where a madman has stolen Hades’ Helmet of Invisibility.

Another chance to see the hunky Marcus from the episode The Path Not Taken. Marcus appears as a ghost to ask for Xena’s help to put right something that has gone wrong in the Underworld.

It turns out the gateway to the Underworld is beneath a very deep lake. And Xena with her many skills has to swim to the bottom. When Xena arrives down below she meets up with the very dead (but still fine looking) Marcus again. It turns out shenanigans are afoot, good people have been condemned to Tartarus whilst the bad are living it up in the Elysian Fields.

A creepy bad guy named Atyminius has stolen Hades helmet. The helmet gives Hades his power and he’s a bit of a wuss without it.  After Marcus and Xena retrieve the helmet and stop Atyminius going on a killing spree, Xena manages to convince Hades to judge Marcus again based on recent events. Nicely played Xena, now her one true love (so we are told), gets to go to the Elysian Fields instead.

I still don’t understand this deep love Xena has for him. I guess he must have treated her better than her fiancé but, what else did he have going for him apart from a nice bod? I liked the whole underworld thing. Charon was a hoot.

Disclaimer: “No Winged Harpies were harmed or sent to a fiery grave during the production of this motion picture.”