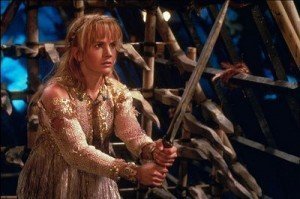 In Dreamworker Gabrielle is kidnapped and forced to complete a series of challenges designed to make her kill. If she loses her blood innocence, she will be worthy to become the bride of Morpheus, the dream god.  Xena has to enter a realm known as the Dreamscape to in order to save Gabrielle and keep her blood innocence in tact.

It all started when Gabrielle, picturing herself as a warrior like Xena, asks Xena to teach her how to use a sword. Xena refuses, telling Gabrielle that her mind is a better weapon. She gives Gabs some sage advice on the rules of survival: “Number one: if you can run, run. Number two: if you can’t run, surrender and then run. Number three: if you’re outnumbered, let them fight each other while you run. Number four: talk your way out of it.

Gabrielle naturally ignores Xena’s advice and when they come to the next town, she decides to buy herself a weapon. Gabrielle puts on a show of knowing how to handle a weapon and the shopkeeper, believing her to be a warrior points her to a Morpheus priest who kidnaps her.

Gabrielle gets a temporary change of costume and doesn’t she look gorgeous. Knowing that if she takes a life she will be killed, she manages to outsmart the warriors that are sent as part of the challenges. In one instance she actually gets the warriors to kill each other. So, she was paying attention after all. Gabrielle proved very resourceful in her attempts to keep her innocence. This proves to be an important link for the season three episode “The Deliverer”.

In the dreamscape Xena faces some challenges of her own. She has to fight herself! I liked the idea of the battle between bad Xena and good Xena. Xena eventually, rescues Gabrielle who has changed her mind about becoming a warrior.