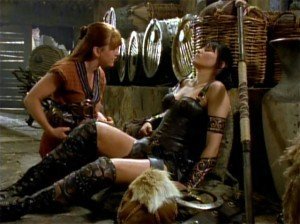 In the Greater Good, When Xena is incapacitated and left near death after being struck by a poisoned dart, Gabrielle is forced to impersonate the Warrior Princess in order to protect a group of innocent villagers.

This is the first sighting we get of Callisto, mysteriously perched up a tree, face hidden. This was a nice dramatic episode.

It turns out that Salmoneus has been hiding out at the village and posing as a water salesman named Lord Seltzer. He is being hunted by an evil warlord named Talmadeus who is seeking revenge on Salmoneus who he claims swindled him in a weapons deal. Salmoneus is concerned for the safety of the villagers and sends for Xena.

Because she was hit by the poisoned dart, the Warrior Princess dies (temporarily). Gabrielle has to carry on regardless for the greater good, with the help of a very cowardly and shaken Salmoneus. I do love Salmoneus, he has so much heart under all that salesman’s hype.

Gabrielle looked real cute dressed as Xena. It almost broke my heart when she was beating up on the tree in her grief. This made the revelation that Xena knew about the effects of the poison harder to bear as she didn’t prepare Gabrielle at all. Was this a test for the Bard?

Disclaimer: “Excessive belching can cause brain damage and social ostracism. Kids, please don’t give in to peer pressure. Play it safe