Candy Crush Saga can be addictive and costly 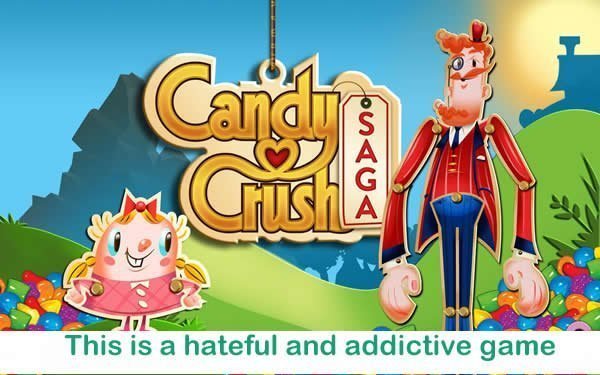 Over the past three weeks I’ve spent over £140 (probably more if I continued counting) on in-app purchases for a stupid game called Candy Crush Saga. If I’d know the game was addictive I would never have downloaded it.
I could tell you all about the game and how to play it but this is not a post to encourage you to try the game. This post is a warning for people who are easily addicted to puzzle games, who have yet to play Candy Crush; DON’T UNDER ANY CIRCUMSTANCES GET INVOLVED.

My problem isn’t with the game so much (although I really hate it for existing); it’s really with me and my refusal to be thwarted by some stupid random puzzle. Without realising it, I’ve racked up a large bill trying to complete puzzles that I really believe I could randomly complete if I just stayed at them for another 30 tries or so. Instead, I spend another 69p on five more lives, and then a couple of pounds on boosters that aren’t’ helpful. Before I know it, I’ve spent nice winter coat money on a lame ass game.

It took a week before I realised that maybe I should just slow down and another week before I counted up my purchases. Damn! I even considered deleting the game off my iPhone but I was well and truly addicted, plus I felt it would have been a complete waste of my time, effort as well as my money, so I didn’t. I’m trying to wean myself off the game, as it serves no purpose in my life aside from being good company when I go outside to smoke a cigarette or I’m waiting in a queue at the shops.

If you choose to ignore this warning fine, just don’t buy the boosters, as it really does seem random the way things eventually fall into place after 20 tries.  I’ve played some of the puzzles with all the boosters and not got anywhere and then later, I play the same puzzle with no boosters and complete the round. Maybe it’s not random but it sure feels that way.

You have been warned.  But if you decide to play the game and get to level 162 please send me some tips as I’m stuck there and refuse to buy another booster. No seriously, I’ve  found out other people are having the same problem so try not to get involved. It’s even be called ‘virtual crack‘ for women.