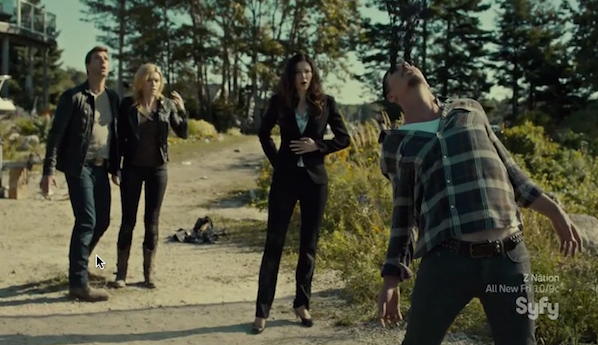 Haven is finally back after a 10-month long break. Despite the long gap between episodes SyFy are still calling these final 13 episodes season 5B rather than Season 6. I’m just grateful that we will get closure over the course of the season and talk about what happened in episode 14, New World Order.

When last we visited Haven Charlotte had decided there was no changing her daughter Mara and because Audrey was dying she decided to merge the two in the hopes that Mara would take on the best parts of Audrey. Changing her mind part way through the merging, Charlotte decided to give her daughter’s body to Audrey. This meant that technically Mara was dead, this was not good news for Duke.

Mara had placed a whole bunch of new troubles in Duke that would erupt if she died. At the end of Chosen, we saw Duke unleashing hundreds of aether blobs that flew all around town hitting people and troubling them, this episode picks up from there.

Audrey, Nathan and Dwight – herein named Team Haven – are struggling to get a grip on the new Troubles. Haven PD are having to deal with a girl who makes people explode when she touches them, a man who causes earthquakes, a deadly gas with a face, someone freezing people and someone has surrounded the town with a fog that won’t let anyone in or out. It’s chaos, the stuff has hit the fan big time and the cops don’t know what they are dealing with.

Dwight decides there’s no point in protecting the big secret anymore and finally tells the whole police department about the Troubles. He and Nathan come out as Troubled to a room of cops. He tells them that the Troubles feed on powerful emotions and that they need to make people feel safe and maintain control.

After being told that Troubled people need to be handled differently, no guns, no anger, no handcuffs, as this will trigger their affliction the cops proceed to do the opposite. 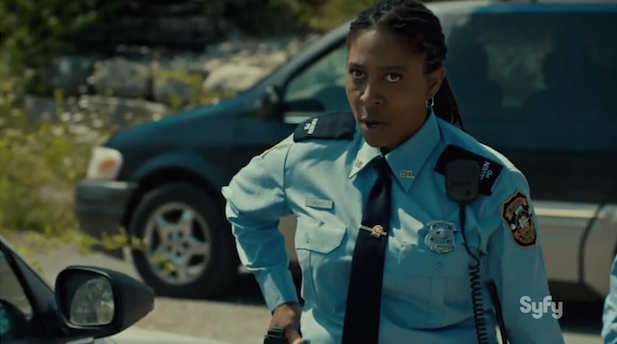 Haven has never been big on ethnic minorities, aside from Tommy, Dukes wife and the guy with the music trouble we rarely see any so it was weird to see so many people of colour in this episode. Even weirder that the two situations that caused a Troubled person to go nuclear were caused by black cops disregarding everything that Dwight had told them and basically making a bad situation worse. It felt so in your face like, look Haven has black people. Maybe casting was sent a strongly worded memo, who knows. All I know is that when you wait for a bus for an hour then six come along all at once, it makes you wonder what happened. 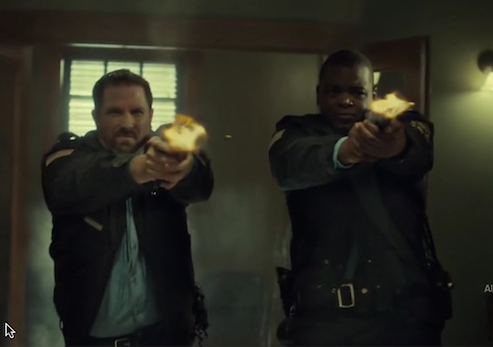 Fear is a powerful thing and clearly when cops are fearful for their lives they reach for their guns. Seeing how badly the police are handling things Dwight announces to the whole town that yes, the Troubles are real and the Guard will be doing the protecting and serving from now on as they’ve been doing it for centuries anyway: “You can’t leave town. Help isn’t coming, we are on our own. We can help people to live with the troubles. The Guard is taking charge. The Guard will protect you and maintain law and order. This is the new haven.” Drops Mike.  A new world order indeed.

This episode was quite big on truth and none bigger than Charlotte’s revelation about The Barn.

Declaring Haven beyond saving, Charlotte tells Audrey it’s time to go home to be with their family. She wants to open a Thinny to leave. She explains that their special rings pull them safely through the void. Audrey doesn’t want to leave she wants her mum to stop the Troubles but Charlotte can’t remove a Trouble without killing the person.

When Audrey reminds her that she built The Barn that would have ended the troubles if she killed Nathan, the person she loves, Charlotte tells her that the Barn would have sent a pulse to kill  all Troubled people ending the troubles forever. Audrey is upset by the cruel measures and compares Charlotte to Mara and tells her to get out of town.

Through an alcohol induced vision Dave manages to lead Nathan and Audrey to the dead body of Joe, the guy with the protection Trouble. He was responsible for the fog. Apparently, troubles don’t always end when the Troubled person dies so now they will need to find another way to lift the fog.

Duke has been throwing himself a pity party. When he reveals to newly Troubled cop Alec that he is responsible for this new batch of troubles, Alec tells Duke to get out of town. – I’m sensing a pattern – Alec is the one that has been freezing people but he got his problem under control by being angry at Duke. 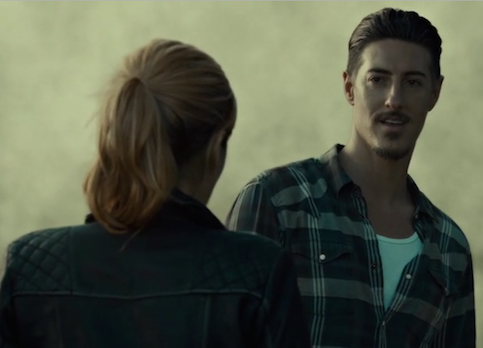 By the time Audrey and Nathan catch up with Duke he’s had enough of hurting people and decides to leave town. He manages to hitch a ride outside of Haven and this is where we get a dun dun dah moment, the truck driver has never heard of Haven.

What does that mean? We know from previous episodes that Haven existed so did Joe’s trouble wipe Haven completely off the map? Or does the person who killed Joe to prevent him lifting the fog have something to do with it?

I was ready to get Duke a tee-shirt printed that reads: “It’s not my fault. Giving people Troubles is my Trouble. Hug me” or something along those lines. Maybe I’ll get it and save it for when he returns. He can’t stay away for too long.

Finally, the hug that Nathan gave Duke made me squee a little. These guys were constantly at each others throats when the series started. I’ve enjoyed watching their friendship grow over the years.

Arrow Season 4 premiere review: Green Arrow
Next Post: Haven season 5, episode 15 review: Power – The lights are out and no ones home