Oversharing on social media is the new normal whether we like it or not. People aren’t just sharing beautiful sunsets with us anymore; now we are subjected to live videos of the birth of babies, tweets about abortions and celebs breaking the news of their break ups on Twitter before the newspapers have a chance to do it.

Being overly inquisitive, I have seen things that cannot be unseen. Even when I’m not being nosey, images of people’s private parts have crossed my Twitter timeline. I find that I now have to scrutinise profiles more carefully before I follow people because people also like to reshare things that have grossed them out.

But why do people share so much of themselves online? A study by professor of psychology Gwendolyn Seidman may provide some answers. Seidman states that people who share more are seeking attention, acceptance and validation from others. But they aren’t getting it!

Seidman says: “They are posting more information and more emotionally revealing information, but are not getting any more feedback than those who are less expressive.” 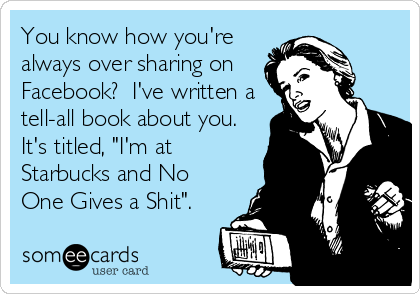 I don’t have a problem with people oversharing their lives because, I can choose not to watch the video, look at the pictures or provide commentary on their tale of woe, plus it’s their lives. What I do worry about is the sharing of pictures and videos of people in unfortunate situations.

If you trip and fall and want to tell the world about it, that’s your business but if you take a picture of someone tripping and falling and post it all over the interwebs is it still your business because you witnessed it? Do you have an automatic right to publish the picture and should you? Think about it while I tell you a story.

The sad case of the couple on the stairs

On New Years day 2014 a video went viral of a young man performing a sex act on woman in public. According to the internet, the couple had been at a New Years Eve party and had too much to drink. They didn’t make it home before giving in to the drink and their sexual desires.

Someone thought this was an event worth recording and sharing online. Before the day was out a picture of the couple sharing a drink together had been shared along with their names. So even though they were not identifiable from the video someone made sure everyone knew who the pair were. The incident trended for days, their were memes and YouTube commentary videos for weeks afterwards.

When this came across my timeline, I was extremely upset for the couple and believed that the Internet had gone too far. We are at the point where tweeting that you’ve just seen someone having sex on a flight of stairs isn’t enough, now you are required to provide photo or video proof. Even in this world of oversharing it doesn’t mean you should.

The reason I’m writing about this incident now is because social media refuses to let this young man move on. In the lead up to 2015, people had started to share pictures of the young man again, some people even refer to the first day of January by the poor guys name. It’s now his day and as long as the internet never forgets it will continue to be his day. This young man is an internet joke.

The creator of the video, the person who provided the names of the couple and the person who posted the identifying picture of the couple didn’t think about the consequences of their actions or didn’t care. The video has damaged two people’s reputation and may even have got them fired from their jobs. Add to that the fact that someone recognised the young man on a train and verbally abused him and you have a recipe for continued harassment.

The problem is the laws are so fuzzy when it comes to harassment and cyber bullying that most people wouldn’t know what to do in a situation like this. I don’t have the answers but if you do please share them in the comments.

The onus then is on the person taking the pictures. In this new age of stranger shaming we should be aware that under Data Protection law, people have a right not to have their personal data collected, published or otherwise processed without their consent. So think before you post an image of someone else’s embarrassing moment.

Also, consider why you are doing it. Is the potential damage to someone else’s reputation worth your quest for validation from people you barely know?

If the answer to that is yes then go a step further and ask yourself if it’s something you’d be happy to share with your mum or your gran.

The next time a picture or video of someone’s embarrassing moment comes across your timeline, think before you share it; how would you feel if it were you or a family member?

Something else to ponder: Oversharing: Are We Relinquishing Our Right to Anonymity?