Branding is an essential part of any business and not something to be taken lightly. Naming your company is the first step in the branding process so it’s important to get it right as changing your company name later can be costly.

An Austin, Texas Public Relations firm is finding this out the hard way. Two years ago Co-owners Ali Slutsky and Mary Mickel chose to name their company Strange Fruit PR despite knowing the history of the name. 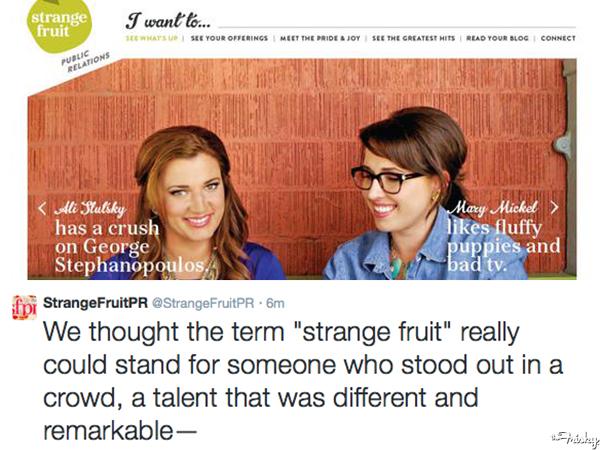 For those who don’t know, Strange Fruit was a poem written in 1937 by Abel Meeropol as a protest against lynchings. The poem starts:

Southern trees bear strange fruit,
Blood on the leaves and blood at the root,
Black bodies swinging in the southern breeze,
Strange fruit hanging from the poplar trees.

Billie Holiday went on to make this song famous and it became a cry for civil rights and an end to racism.

The owners knew of the song when creating their business, but chose Strange Fruit for its culinary sound. According to Mary Mickel they hadn’t researched the song’s lyrics. So when stuff hit the fan they seemed to be unprepared.

Between Saturday 6 and Sunday 7 December, the company were lambasted on Twitter and schooled about their choice of name.

.@StrangeFruitPR I’d truly like to know the inspiration for this name of yours. You do know what its a reference to?

@StrangeFruitPR? Who hires a firm that can’t Google – or does, but just doesn’t care? Expect defensive “post-racial” retort in 3…2…

@StrangeFruitPR Turning a metaphor for the lynched bodies of Black people into an obnoxious slogan is the very definition of unacceptable.

Eventually they apologised claiming they didn’t know the meaning of the term: 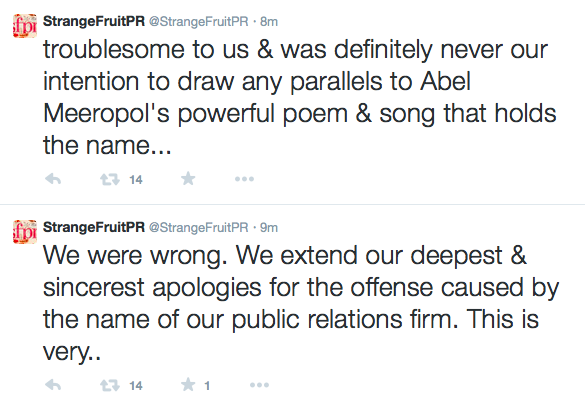 “We thought the term ‘strange fruit’ really could stand for someone who stood out in a crowd, a talent that was different and remarkable – in a good way. Again we were wrong. This past behind the name does not convey the mission we have for our company, or our personal beliefs and we are taking the immediate and necessary steps to change our name.”

But Twitter being what it us, someone found past tweets that indicate that they were fully aware of the term and had been pulled up before in 2013: 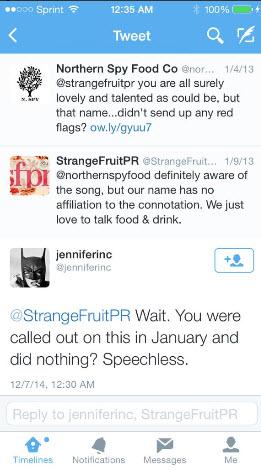 By late Sunday afternoon the company had taken down their Twitter and Facebook accounts and removed the website. They will be taking some time out to choose a new name.

It’s a shame really. As a PR company they may have to do a lot of damage control to recover from this. Let’s hope the duo put a little more thought and research into choosing a new name.

Remember people: Google can be your friend!