Love you in this

It would be totally remiss of me not to dedicate the first ‘Loved you in this’ post to the woman whose high kicks and battle cry kick started the 90’s girl power movement for me. Lucy Lawless: as Xena Warrior Princess you became the epitome of girl power long before the Spice Girls took the world by storm with their single Wannabe.

As you know (it was the role that made you after all) Xena was a former warlord who turned her life around after meeting a young village girl called Gabrielle. As Xena, you were my ultimate fantasy hero, kicking butt and sticking up for the little people. Your back flips were just ridiculous and I loved them. I held my breath when Xena flipped from land onto the ship of the Lost Mariner. That was some awesome shizz right there and I was totally happy to suspend disbelief.

Despite using her powers for good, you could tell that Xena really enjoyed sticking it to the bad guys and occasionally her dark side would show out. Lucy this role was made for you and you for it. You and Xena became my first girl crushes.

You showed your acting chops in Xena when you had the opportunity to play several Xena lookalikes throughout the series. From Diane the Princess to Meg, the tramp, you brought something different to each character and I just crushed on you all the more for it. Occasionally you’d do some eye candy photo shoots that sizzled and I was okay with those because let’s face it, you’re frikking hot! 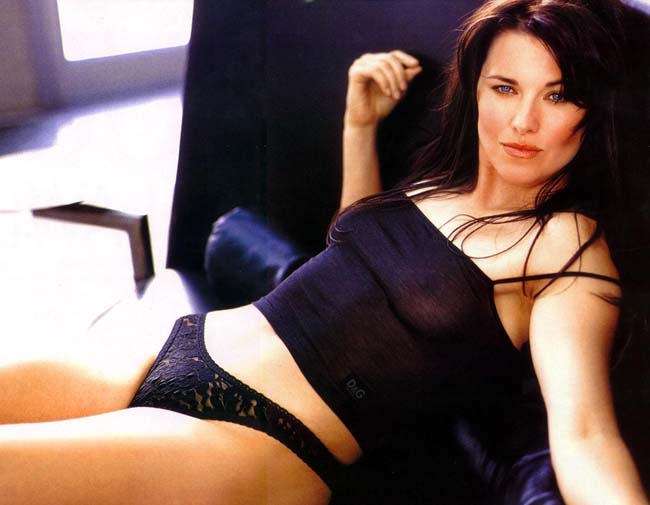 I was devastated when Xena ended in 2001 with no possibilities of the Warrior Princess returning to our screens because: spoiler reasons. I was in some serious mourning for a while. In the end to get through it I had to pretend Xena was never a thing and that you never existed. Buffy: The Vampire Slayer and Charmed helped to pull me through. I know there is no comparison but hey.

Conflicted about you in this…

I didn’t see you in anything until 2005 when you joined the cast of Battlestar Galactica in the episode called Final Cut. That’s not to say you weren’t doing stuff, just that you didn’t appear in my kind of stuff until BSG. I was so freaking excited to see you again. The fact that you were playing a Cylon was okay because at least you were on my TV screen. Your character D’anna Biers started off as a bit of a bitch trying to get Caprica Six and Sharon to implicate themselves as batshit crazy bots so you could box them but in the end it was your model that was out of line.

After a brief three-way fling with Baltar and Six your character decided she needed to know who the Final Five were. This crusade drove her crazy and her whole line got boxed. It was a pretty awesome storyline and I had a total love hate relationship with some of the Three models. It  was also great to see you playing different characters again like in Xena.

Next up was Spartacus: Gods of the Arena where you showed that you were still hot as heck but that I should start expecting you to play ladies of middle years. This just reminded me that I too am getting old and that knowledge sucked for a bit. But as Lucretia you were divine even though I wasn’t actually cheering for her as she was a bitch. I did however feel a bit of sympathy for Lucretia in the end and was saddened to see her go. You were amazing as usual, I have to say you play crazy really well just as well as you do evil and fun, and loving and all that stuff.

Because you were the wind beneath my wings for a long time and I admit I couldn’t outright hate you in most of the roles I’ve seen you play, even when you were playing someone evil. Except that one time in Burn Notice when you were totally the bad guy and yes, I didn’t like you in that.

I hope it’s not too long before I see you in another show that I like. How about The Walking Dead or Game of Thrones?Whilst I’m waiting I tip my chakram to you Lucy.

Game of Thrones: Breaker of Chains broke my heart
Next Post: More4 drops Scandal TV series because nobody was watching