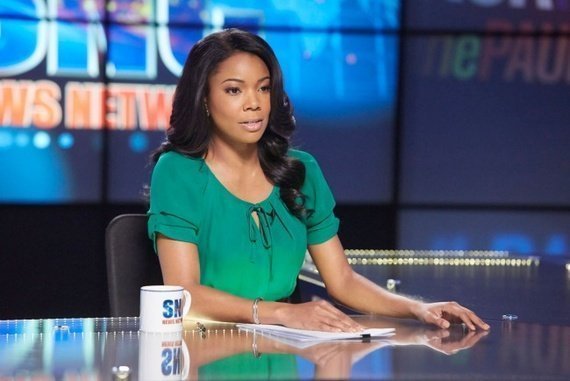 I’ve given Being Mary Jane the four-episode test and I’m not sure how I feel about the series. I don’t love it but I don’t hate it. Well actually, I hate a lot of the characters but unlike Mistresses, the show doesn’t have me flipping through my iPad for distractions.

Being Mary Jane stars Gabrielle Union in the title role about a successful anchor on a major TV network. She is single and beautiful but finds herself falling in love with a married man. Oh hum. Soapy drama is not my favourite genre so a show has to have a lot going for it to keep me interested. Mary Jane seems to be about relationships, which on it’s own is dull. I have nothing against real life, I have to live and observe it everyday which is why I like to escape from it. Mary Jane is not my idea of escapism. That can be seen as a backhanded compliment as most of the characters are quite real, which is why I don’t like them.

Aside from Mary Jane and the way she rants at her weird and dysfunctional family, there’s her drug addicted brother Patrick who seemed like he was getting his life together, but in episode four we find he’s back on drugs. Then there’s Patrick’s daughter Niecy who seems to be churning out kids for some no good guy. Bored now.

The only two characters worth a thought are Mary Jane’s dad played by Richard Roundtree and in the closet gay news anchor Mark Bradley. Mark only got on my list in episode four because he recognised that sometimes to progress you have to change, and he’s embracing that change for the sake of his show.

Up until episode four, Mary Jane appeared to be trying to extricate herself from her shambles relationship, now it looks like she has given in to it.  That’s unfortunate but predictable.  It would have been too much to ask for the show to portray a single woman, trying to do the right thing.

Unlike Supernatural, there are no angels in Being Mary Jane but there a lot of people with personal demons to slay. Unfortunately, relationship dramas don’t have cool demon slaying knives so it’s far less exciting to watch these people plod through their lives. I don’t want to compare this show to Scandal because it is nothing like it, save to say that at least with Scandal the drama is intense, sometimes over the top but there are a few characters to route for. There’s no Team anything in Mary Jane. If they introduced a ghost into the series I might find myself getting behind it a bit more and probably routing for the ghost.

When your female role models are kickass women like Xena, Buffy, or Shaw (Person of Interest) who physically kick ass or Jessica Pearson (Suits) who verbally kicks ass, it’s hard to get behind a woman who can’t find it in herself to slay the demons of her love life. Even Olivia Pope pisses me off sometimes but when she’s not talking about making jam with the POTUS, she’s taking names and getting shit done. Like I said drama is not my favourite genre unless it involves action, like Person of Interest, or intrigue and assassins like Scandal.

I gave Mistresses seven episodes of benefit of the doubt until I realised the show had nothing for me. I’m not sure I want to go down that road again with Mary Jane.