Another late review for Under the Dome, I don’t know why I’m not rushing back every week to watch the show. Oh yes I do, it’s because it’s killing me slowly inside which is why this will be my last review of a show I thought had promise. Can’t get them all right I guess. So let’s talk about The Fourth Hand for minute.

There was so much going on in this episode and some of it was interesting like Reverend Drug Addict’s recipe for that heavenly drug. Julia finally gets a clue as to what is going on in town. So far she knows the Rev and Sheriff Duke are involved but how long before she links Big Jim to the drugs? 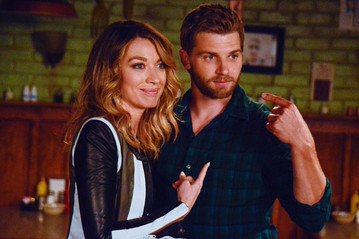 I would have been totally interested if it wasn’t’ for the fact that Big Jim is not the boss of himself, he actually has a boss who wants to flood the town with drugs and booze and crazy shit like that. Fine people have bosses. What pissed me off about this episode was the fact that after eight days of being trapped under the dome, Jim’s boss comes out of the woodwork with a lame excuse of laying low. It seems crazy to be upset by such trifling dialogue but I can’t help it.
I had visions of seven years from now, new characters turning up from nowhere talking about laying low. I just cannot deal!

Jim’s boss is Max, she has a history with Barbie (big deal) and has decided to come out from hiding to make some money. Give me strength. There’s a big frigging butter dish trapping the whole town and Max is concerned with making money. I put up with the folks of Chester’s Mills not fully grasping the reality of their situation. I put up with bat shit crazy Junior being given a gungiven a gun and roped into the police force but I just can’t give a shit about a bunch of people looking to sell drugs to a town already filled with damaged people. So this is the episode where I say “drop me out, I’ve had enough.”

I can’t watch this show and suspend disbelief for another episode. It’s a shame too because I was kinda interested in the fourth hand on the mini dome and even the connection between Junior’s mum and Angie as contrived as it seemed. But I care about my sanity more and this show will send me cuckoo if I let it. I was already banging my head against the back of the sofa when Maxine blackmailed Jim and Barbie. I’m done!

So you think you own your ebooks – newsflash, you don’t!
Next Post: Head banging your way out of TV show fandom