As one life comes into the world another is taken

Imperfect Circles was slow paced compared to the riots of last week’s Under the Dome. This week a woman died and another had a baby all regular stuff really if you discount the fact that Angie was not abused in this episode. I was getting fed up of seeing her locked up or slapped around.

The fall of Big Jim

The subplot that interested me involved Big Jim Rennie. I don’t know why Olly thought he could mess with Big Jim but props for trying.

After slapping Junior about and warning him to stay away from Angie, Big Jim kicks him out of the family home. That scene seemed really weird to me and I had to wonder for a bit if Angie has an effect on the men around her. Big Jim was almost as intense about Angie as Junior was. If she’s not a child of the dome then I assume Big Jim is just protecting her in order to preserve his own name. He can’t let it get out that his mentally unstable cop son locked the poor girl up for days.

Talking of his name, it seems to be mud as far as Olly is concerned. After blackmailing Jim and therefore the town over the water shortage last week, Olly has stepped up his game and decides he wants to try his hand at running the town. You can’t blame a man for having dreams; let’s see how that works out for him.

He seemed quite happy to grant the good people of Chester’s Mills access to his well but he already had a plan in place. Olly and his goon friend Boomer have taken control of Jim’s propane warehouse. They even went as far as changing the locks. When Jim tried to gain access Boomer gave him a hiding. As soon as he threw the first punch I was like, RIP Boomer 2013-2013.

At the start of the series, even I thought Councillor Rennie was a puffed up mouth piece but he killed the Reverend without batting an eyelid. The guy is not to be trifled with as Boomer found at later that evening when Jim made Boomer go boom. Ouch!

Olly has made the mistake of showing his hand to Big Jim so I imagine a couple of episodes from now it will be RIP Olly 2013-2013.

In other parts of dome town Joe and Norrie are trying to figure out how they are connected to the dome. Norrie hopes that if they can connect with it they can convince the dome to go away. She wants to turn it off so she can get more insulin for her mum. So sweet. Good luck with that.

They eventually find the centre of the dome and there’s a baby dome. Norrie pours water over it to reveal a purple glowie egg thing. Not sure what made her pour water over it but we don’t have time to ponder those questions. I guess this is supposed to be a big reveal but I was like, OK now what? 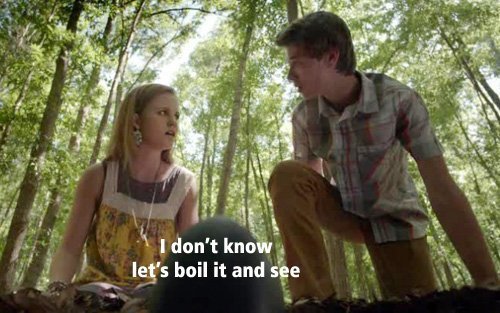 Anyhoo, Joe thinks it’s a generator and tries to talk to it like it’s a computer until they decide to touch the little dome together. Norrie then sees a vision of her mum and heads home quickly.

The dome giveth and taketh away

This is where it gets weird. Whilst interesting things were happening to Big Jim and Angie was burying Rose, Alice was delivering a baby.

Julia Shumway’s neighbour came locking for yoghurt, saw a vision of her husband, reached out to touch him and got dome zapped. This caused her waters to break and after being gas jacked by the murderous Dundee brothers, Julia and Barbie took neighbour Harriet to Alice as they couldn’t reach the clinic.

Poor Alice was already suffering from lack of insulin but soldiered on the best she could through the birth. In the end though Barbie helped to deliver the baby and Harriet promptly named her Alice. Then big Alice took a turn for the worst and died. As one life comes into the world another is taken. 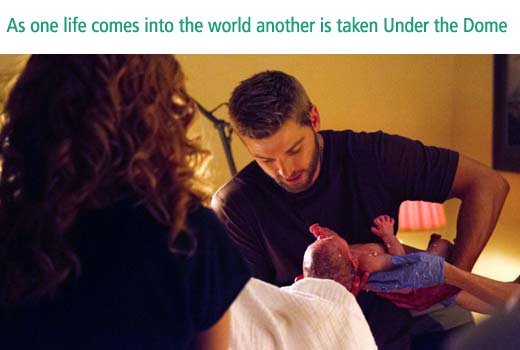 My questions: It’s obvious that the dome sent Norrie to say goodbye to her mum but did the dome deliberately trigger Harriet’s premature labour knowing that Alice was about to die as a way of balancing things out? Am I crazy?

Other stuff that happened

So yeah, there was a lot of death in Chester’s Mills this week. If they keep this up there will be very few people left at the end of the season unless there are other pregnant women around.

Making lemonade from a morning full of lemons
Next Post: Tools of the trade – mobile blogging using the WordPress app