The premier of CBS’s new drama Under the Dome opens with a man digging a hole to bury a body. Then it cuts to a diner where another man is having a conversation with a waitress about elections and cars.  More scene switching takes us to a cellblock where the sheriff is literally sleeping on the job in one of the cells. So far, so what the heck does this all mean? Luckily, it gets better.

This episode really starts when the town starts to shake and we hear a loud bang. Killer dude has just crashed his car into a field and sees a cow split open giving the confused audience a clue to the series title. Killer dude goes to explore and we get to understand that a dome has come down on this small town. They’ve been butter dished!

Obviously when something like that happens you poke at it to investigate, I know I would. Unfortunately, the dome gives off an electric shock when you touch it for the first time. Hopefully in episodes to come it will be explained why people aren’t’ shocked after the first time.

It’s not just cows that have been sliced through by the dome. Houses, cars and anything else that was in the way, gets the cheese slicer treatment.  The most notable scene was the unlucky plane flying into the dome and splatting like a fly on a windshield.

As the townsfolk start to realise they are trapped in a large upside down glass bowl we get to know some of the characters. For instance the Sheriff’s name is Perkins but after bonding with him he dies at the end of the episode. Whilst patrolling the dome he touches it and the electric current yanks his pacemaker out of his chest. Maximum ouch.

His deputy Linda is engaged to Rusty, a fireman who’s trapped on the other side of the dome.

Big Jim Rennie (the guy from the diner) is a car salesman and a councillor. He’s a take-charge type dude who gets told to stand down by Sheriff Perkins. This prompts him to blackmail the sheriff, something to do with stockpiling oil. Who knows at this stage.  I imagine with the sheriff dead, he’ll be running things next episode

Killer dude is an out of towner called Barbie (obviously a nickname), and he’s now stuck in town under the dome. He’s offered a room for the night by the town journalist Julia Shumway whose husband was thrown in a grave by Barbie at the beginning of the ep. Oops. Poor Mrs Shumway believes her husband Peter is cheating on her because he’s nowhere to be found. I wonder how long it will be before she finds out he’s dead.

The strangest characters are the young waitress/candy striper Angie and her crazy boyfriend, Big Jim’s son Jnr. I can see me not giving any fraks for these two but it seems Jnr has some big part to play. He locks Angie in his dad’s storm shelter and tells her he understands some stuff. Shrug! I’m glad he does, hopefully next week he’ll explain it to the rest of us! 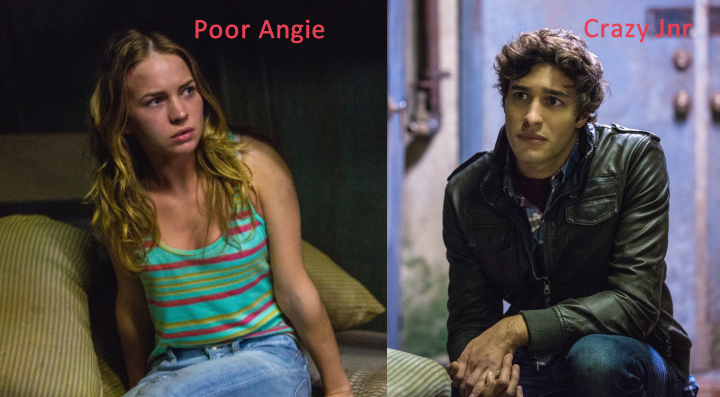 Other out of towner’s are a lesbian couple and their daughter who couldn’t wait to hightail it out of town, luckily they managed to stop the car before they became dome fodder.

I’ll be tuning in next week to find out why young people collapse when they are near the dome and start spouting weird stuff like “the stars are falling in lines.”

And of course I want to know what the freaking dome is, who put it there and why.

What did you think of the first episode of Under the Dome? Will you continue to watch the series?

I now have an Alexa Rank – one goal down!
Next Post: Marketing your blog using social media