For anyone coming to the Stargate universe for the first time I’d advise you not to start with Stargate Ark of Truth. 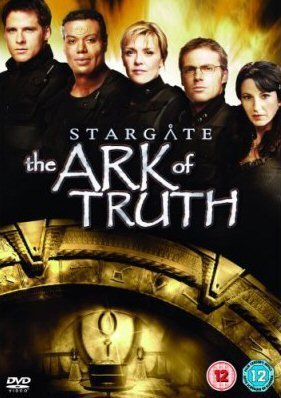 There is no hand holding in this movie. If you didn’t at least watch season ten you will be wondering who everyone is and what is going on. Unless of course you watch one of the DVD’s special features Prelude to The Ark of Truth which tells the story so far.

SG1 fans will be happy to know that Ark of Truth wraps up the Ori story.

It was easy to immerse myself into this movie. The visuals were very similar to a regular episode of Stargate which, in my opinion have always been of high quality anyway. The special effects have been seriously amped up. The characters remain true to form with chemistry and humour we have come to expect. Written and directed by Robert C. Cooper Ark, has enough sub plots so everyone gets to shine at what they do best.

The film starts “Millions of years ago, in a distant galaxy. . .” We see a group of Ancients discussing the use of the ark against the Ori. They agree not to use it. Flash forward and we see SG1 Daniel Jackson (Michael Shanks), Teal’c (Christopher Judge), Cameron Mitchell (Ben Browder), Vala (Claudia Black), and Samantha Carter (Amanda Tapping), excavating an artefact from the ruins of Dakara. Could this be the Ark?

Before the team can open up the artefact they are surrounded by Ori followers led by Tomin (Tim Guinee). After a brief fire fight the team manage to kill a prior which causes Tomin to re-evaluate his beliefs. He defects and promises to help SG1 in their quest to find the Ark. Tomin is eaten up with guilt and Teal’c has a discussion with him about this. We see that despite all the years of doing good Teal’c has never forgiven himself for the atrocities he has committed. This was a truly touching scene. 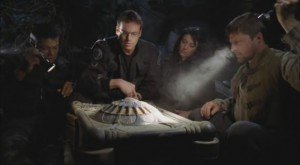 Enter the redshirt (you know there has to be one in any good movie). Whilst the SGC are treating Tomin like an ally the IOA send over a representative who has other ideas. Meet Marrick (Currie Graham), a slick and slimy replacement for Mr Wolsey. As an ex black ops operative it’s hard for SG1 to pull the wool over Marrick’s eyes. The team have to go in search of the Ark in the Ori galaxy and unfortunately Marrick has to accompany them.

It’s not long before we see Marrick has another agenda. He has no faith in SG1 finding the ark and puts a plan of his own into action. In every movie it’s good to have someone you can focus all of your hate towards. Marrick is the guy in this film. It wasn’t  apparent straight away that he was wearing a bull’s-eye on his chest but the more he opened his mouth and pissed me off the more I chanted die, die, die until I realised “You’re gonna get yours”.

Like I said previously there are several plots running alongside the search for the ark and without giving even more of the plot away the ancients (or at least one of them) decides to lend a helping hand. The ending seemed a bit rushed but a lot was crammed in to 98 minutes.

As mentioned previously special features include Prelude to The Ark of Truth. This is helpful even if you have seen every episode.   The feature has a commentary with Robert Cooper, Peter Woeste and Christopher Judge.  There is also a feature on the making of The Ark, but best of all is an appearance by the cast at 2007’s Comic Con, in a panel discussion taking questions from the floor.