The Buffy season seven finale had all the makings of a Joss Whedon episode.

The laughs were there, the drama the pacing was excellent. I was totally gripped. This episode transported me back to season one which was a good thing, I almost forgot it was really the last ever episode. There was only one scene which made me uncomfortable and that was the Willow and Kennedy kissage. I still can’t get used to the idea of them being together. Tara was special. She was the other half of Willow. I know Willow deserves another chance at happiness but she can do so much better than that loud mouthed bit..ca. Kennedy summed up my feelings for her quite nicely. She’s a brat.

Luckily we had a nice geek moment with Xander, Giles and Andrew unable to sleep playing a silly board game. This scene brought back to me what TV will be losing with the end of Buffy. The writing is amazing. Everything was going just fine for me, Buffy had a plan people seemed willing to follow. The Watcher/Slayer father/daughter relationship between Buffy and Giles seemed to be mending. Then Andrew had to go and make that speech in the hallway at Sunnydale High. Cue instant tears. After that the tears were never too far away. Now I realised it was the end and that people may die.

Even whilst chuckling through that special core Scoobies moment when they discussed plans for shopping the next day, I had this great rush of emotion. I loved these guys. I’d spent seven years getting to know them. Identifying with some of their situations, willing them to get through them, feeling like I was part of the good fight. It’s been great recognising the Xander, Willow, Buffy and Giles in me. 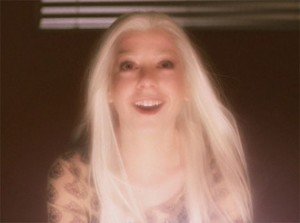 Buffy’s speech was a killer. This is one time I didn’t mind the speechyfying. I felt inspired and empowered. It’s truly what Buffy has been about all this time. When Willow performs her spell and her hair turns white, I knew it was good magic and things were going to be alright. Then Buffy got wounded and before I could think what this might mean Anya got sliced through. I cried out through tears “No”. The action was so faced paced I was still crying out when Robin Wood got diced. I couldn’t take anymore. I stopped watching and decided to write this piece.

The Fear Demon had come to my house and was throwing a party. It’s not bad enough that I knew I was watching the last ever Buffy episode. The last episode written by the creator Joss Whedon, the last ever episode of the last ever season. Yes. In an apocalypse you expect some death but, I had taken these people into my heart and cared about them. When Buffy wanted to kill Anya I was torn. I wasn’t ready to let go of Anya then. I was thinking along the same lines as Xander. I hoped that Anya could be redeemed and was happy when she was allowed to take her first baby steps towards redemption even though she lost Halfrek for her trouble. 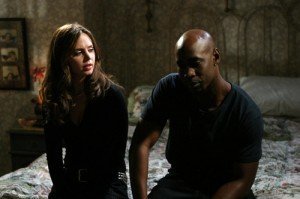 When Robin Wood trapped Spike in his garage I was hurt and excited at the wrong rightedness of it all. Yes. Spike killed Wood’s mother but Spike has a soul now. He’s not the same guy. But Wood had to learn this the hard way. I was glad that Spike didn’t kill him and equally glad that Wood and Buffy hadn’t got passed that first date. Wood and Faith are much better suited. When he told Faith that basically she didn’t rock his world in bed I thought yes, she needed to be told and he’s the man to tell her. He could be the man to teach her that there is so much more to the world than Faith. I was hoping that Faith would finally be able to commit to someone. I prayed that they would both come through this.

As I started to write this I was still praying. I couldn’t believe what a coward I was. I mean it’s an apocalypse for Joss’s sake. How will I know who lives or dies if I don’t finish watching it. I wanted to continue to but all the fags in the world weren’t going to get me through this. I decided that a nice alcoholic beverage might assist me. Then I started thinking about Andrew. Oh my god Joss is going to kill Andrew. I pulled myself up and poured myself a drink. I’m not a coward. I can do this. I needed to know. Finally with the help of some good old fashioned Dutch courage I kicked the little Fear Demon’s butt and resumed watching.

The show ended with hope and a promise of a new life. It was so much more than I could hope for. Anya died saving the life of a human and in my eyes she totally redeemed herself. I’m happy for her. She loved humans. 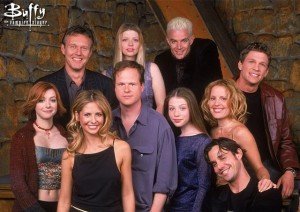 Thank you Joss. Thank you for not killing th core scoobies.

Buffy – The End Is Coming Time To Grow Up
Next Post: Star Trek TNG: Season Seven »